Here is the latest video from the fabulous Charley Crockett.  It continues the spaghetti western-inspired series of videos, following a lonesome character on his travels through the glorious American countryside.  Crockett says of the concept: “Everybody thinks it’s about a relationship. On the surface I guess it is, but I was thinking of it as a metaphor about my health problems. But the meaning belongs as much to the folks listening as it does to me.”  That telephone has been everywhere. END_OF_DOCUMENT_TOKEN_TO_BE_REPLACED

Charley Crockett has released the latest in a series of spaghetti western-inspired videos to accompany the new single ‘Don’t Cry’.  In this instalment, his lonely character travels across desert plains and endless fields, runs through graveyards and performs on beaches on his way back to his lover.  Is there a better artist producing timeless, classic country today?  Crockett’s distinctive vocal draws you into the narrative beautifully.  ‘Don’t Cry’ is taken from upcoming album ‘Welcome to Hard Times’, which drops on 31st July.  Crockett says the record is, “…for the folks who feel like everything’s fixed. If you think you’re playing a rigged game, you’re right.”  Timeless and yet perfectly timed for 2020.  Check it out. 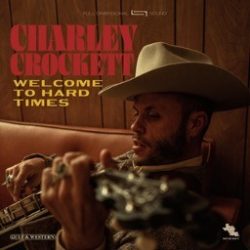 If you’ve been looking for something new to listen to, but you aren’t quite sure where to turn then there’s good news. Charley Crockett’s self-professed goal for his new album was to “make an album that would reclaim the entire conversation about country music”. That’s a pretty high bar for an artist to set for himself, but when you’ve got Mark Neil producing and songwriting assists from Pat McLaughlin and Dan Auerbach—you should shoot for the moon. END_OF_DOCUMENT_TOKEN_TO_BE_REPLACED

At the end of the month, Charley Crockett is due to release a highly-anticipated new album, ‘Welcome to Hard Times’.  To whet our appetites, here is the latest single from the forthcoming record.  ‘Run Horse Run’ gallops along, a rhythmic, haunting song accompanied by a terrific video, which is part of a series of cinematic spaghetti western-style releases.  Once again, Crockett plays a loner wandering and sprinting through the wilderness.  The old clock and yellow phone seen in previous videos again make an appearance, adding a sense of mystery.  END_OF_DOCUMENT_TOKEN_TO_BE_REPLACED

We leave you this week dear reader with the first track to be released from Charley Crockett’s new studio album ‘Welcome To Hard Times’ which will be released July 31st on Thirty Tigers. Produced by Mark Neill, with songwriting contributions from Pat McLaughlin and Dan Auerbach, the record is described a genre-bending mix of classic country, psychedelic spaghetti western and rhythm & blues. He tells us: “This record is for the folks who feel like everything’s fixed. If you think you’re playing a rigged game, you’re right. If it seems like all the cards are marked in advance, they are. But you still gotta roll the dice, even when you know they’re loaded.” The terrific video is shot on location in the Sierra Nevadas, and is part of a series Crockett is shooting and directing over the next month, where he will play the same character walking alone through isolated landscapes in the American wilderness. At least he’ll be socially distancing. Have a good one.

Tonight was not only a celebration of great music but was also a testament to two artists who’ve triumphed in the face of adversity. For Jaime Wyatt, any suggestion she might want to put the eight months she was incarcerated in jail for ripping off her drug dealer behind her are swiftly assuaged, her reflections on this period of her life put front and centre stage during her performance tonight – tackled with both candour and humour. Her 7 song ‘Felony Blues’ EP made a major impact when it was released in 2017 and demonstrated a great knack for catchy tunes with memorable song lyrics. This performance also showed her no less capable as a singer and raconteur.
END_OF_DOCUMENT_TOKEN_TO_BE_REPLACED

A few years ago, Texas country-blues singer Charley Crockett wrote a song called ‘How Long Will I Last’ about an uncertain love affair. Little did he know the song title would also prove a prophetic metaphor for his recent struggle with heart disease. Purely by chance when he was seeking medical advice for repairing a hernia in January, Crockett learned he also had bicuspid aortic valve stenosis, a disease where, instead of having three aortic flaps that allow the blood to flow, two are fused together. “The cardiologist determined I was one year away from heart failure. It was really, really good luck that I found out what was wrong with me.” END_OF_DOCUMENT_TOKEN_TO_BE_REPLACED

Texan Charlie Crockett’s music has been described by No Depression as “sounding like what might happen if Roy Orbison and Ry Cooder teamed up with Dick Dale” and what more of a recommendation do you need to go out and see for yourself?  Crockett arrives in the UK in July for a series of dates ahead of the release of his new album ‘Lonesome As A Shadow’ which came out in May.  Produced by Matt Ross-Spang (Jason Isbell, Margo Price, Zac Brown) and recorded at Sam Phillip’s Recording in Memphis, TN, the album is Crockett’s fourth full-length album and his first release consisting entirely of original songs. In addition to Crockett on vocals and guitar, the album features his longtime touring band, “The Blue Drifters.” Here are those dates. END_OF_DOCUMENT_TOKEN_TO_BE_REPLACED