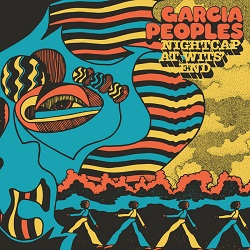 Garcia Peoples return after the epic freak-out of ‘One Step Behind‘, which featured an extended piece playing out at over thirty minutes, with an album of a dozen songs of a more conventional length. It cements Garcia Peoples as key players in an American psychedlia revival – alongside such bands as Allah-Las.  Without resorting to parody or arch-reinterpretation Garcia Peoples create a sound which is akin to classic Jefferson Airplane – or, for that matter Grateful Dead – with rock interpreted through a filter which suggests familiarity with the intricacies of folk and without the bombast of wearisome heavy droning rock. END_OF_DOCUMENT_TOKEN_TO_BE_REPLACED