At AUK we are now well into our quest to find the ‘Top 10 Americana Albums Ever’. Over the coming weeks and months each AUK writer will in turn, present their own personal selections. When each writer has had their say, a shortlist of the most frequently chosen albums will be drawn up and voted on, in order to generate the definitive AUK writers top ten. This week AUK stalwart and institution Paul Kerr steps up to the podium.

END_OF_DOCUMENT_TOKEN_TO_BE_REPLACED

Church attendance figures in the United States can seem quite staggering to us, largely secular, limeys. Around 45% attend on a regular basis compared to just 7% in the UK. In addition, many other Americans strongly identify with Christianity, even if they are not regular church-goers. Furthermore, the South, from where much of the music we champion comes from,  accounts for 11 of the top 12 states for highest level of active worship (the exception is Utah), each being higher than the national average. END_OF_DOCUMENT_TOKEN_TO_BE_REPLACED 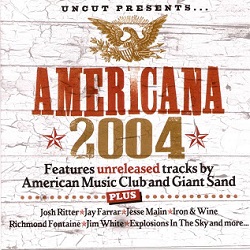 Magazine cover discs come and cover discs go, sometimes there’s a track or two that sparks an interest – I first encountered The Decemberists via a disc from Word magazine, that was a good find. Just a few, though, are quite literally life-changing.  That may sound like terrible hyperbole but in the case of Uncut’s ‘Americana 2004‘ disc it is quite true. Mainstream popular music in the Nineties had pretty much been a washout for me and I was doing little more than keeping up with the likes of Dylan and Neil Young with the occasional other breakthrough album or artist, but mostly I was back exploring the richer world of folk which was generally finding far more imaginative paths. And this was ok, but I needed some new directions, some new bands, some new voices. And then on a long journey North I picked up at a motorway service station, almost on a whim, the latest issue of Uncut – I can’t really say why, certainly the front cover of The Cure’s Robert Smith was not a big selling point. As the journey went on and the traffic got slower I decided to switch from the radio to the ‘Americana 2004‘ cover disc. And everything changed. END_OF_DOCUMENT_TOKEN_TO_BE_REPLACED 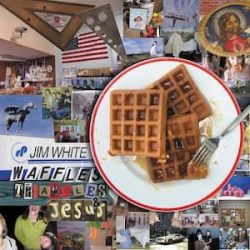 Jim White’s first couple of records are classics of the genre; they were strange missives and they heralded a new voice. It’s frightening to think that it is 20 years since Wrong-Eyed Jesus and this latest record – with a title that’s almost a parody of a Jim White record title – tries hard but ultimately falls short. White is an engaging performer and live he often bends his songs into interesting new shapes. White doesn’t make bad records, he doesn’t write bad songs, but he didn’t used to write ordinary songs and he does now, and that’s what is disappointing. END_OF_DOCUMENT_TOKEN_TO_BE_REPLACED

It was pleasing to see a near capacity crowd turn up on a wet and cold Sunday night in Glasgow to see Jim White. Often seen as a cult artist and with an idiosyncratic style that rarely bothers the airwaves, White is a bit of a polymath. Aside from his songs he has worked in books, art and film while he had a well noted list of occupations before making his music debut at a relatively late age with (The Mysterious Tale Of How I Shouted) Wrong Eye Jesus. Tonight’s show saw him backed by Cicada Rhythm, a Georgia two piece, and drummer, Colin Agnew, also from Georgia,  who were just about the perfect accompanists for his richly textured songs. END_OF_DOCUMENT_TOKEN_TO_BE_REPLACED

And who doesn’t love waffles, polygons and kind men? Jim White will be releasing his new sixth solo studio album “Waffles, Triangles & Jesus” (which sounds like an episode title from the new Star Trek series) on 10th November on Loose in the UK, described as “a mind-bending joy ride of sonic influences featuring a bevy of his hometown Athens’ roots musicians, plus west coast indie darlings Dead Rock West, and rock and roll maverick Holly Golightly.” Line of Best Fit have got a track from it over there but in the meantime, here are his live dates where you can catch him round the UK next month. END_OF_DOCUMENT_TOKEN_TO_BE_REPLACED