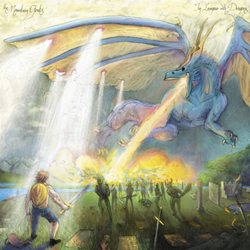 Do folk still make rock operas in the 21st century? Seems like it as The Mountain Goats’ John Darnielle says that ‘In League With Dragons’ was originally supposed to be a series of songs about a “besieged seaside community called Riversend, ruled by a benevolent wizard.” Maybe Rick Wakeman wasn’t available to play the keyboards but the project morphed into this collection of slick songs which continue the sonic direction taken on their last album, ‘Goths’. Darnielle remains a whip smart writer, a cross between Willie Vlautin and Eef Barzley if you wish, with several of the songs here mini sketches of contemporary wizards such as rock stars and sportsmen. END_OF_DOCUMENT_TOKEN_TO_BE_REPLACED

The Mountain Goats, our favourite band to be named after animals since, er, The Animals, have announced their return with a new album called ‘In League With Dragons’ which is due April 26th on Merge. The cover of it’s spectacular, which you can gaze at below.  The album is described as “surging with wild tales of revenge and redemption, heroes at a crossroads, and great figures in decline,” with twelve new songs penned by John Darnielle that include a wide array of styles, from shades of the 80s Athens scene to swathes of outlaw country and a few motorik meditations.  END_OF_DOCUMENT_TOKEN_TO_BE_REPLACED 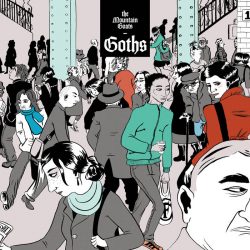 Whatever concept inspires John Darnielle is almost incidental to the progress that he has made as a writer and performer. The last record was predicated on the sad tawdry circus of wrestling and this one on Goths. Both continue his development into one of the great contemporary songwriters. The sonic palette continues to expand – you might expect a record about Goth to subculture to in some way ape the genre but Darnielle sidesteps this smartly. There are a few musical Goth references but mostly the songs eschew guitars and synths and rely on the subtle shading of woodwinds. END_OF_DOCUMENT_TOKEN_TO_BE_REPLACED 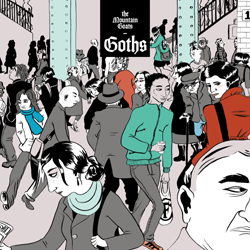 John Darnielle’s the Mountain Goats release their latest album Goths on May 19th. NPR are streaming it from today and you can listen to it here. For their 16th full-length album, Darnielle takes a conceptual detour. As its title suggests, it’s about growing up goth — about establishing a place for yourself among other outcasts — but it also finds the band shedding guitars and adding a fourth permanent member in multi-instrumentalist Matt Douglas. END_OF_DOCUMENT_TOKEN_TO_BE_REPLACED