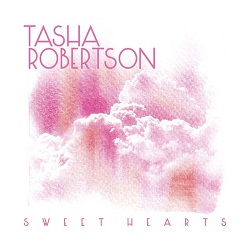 ‘Sweet Hearts‘ is the debut EP from Essex singer-songwriter Tasha Robertson, and is made up of four tracks. Tasha Robertson’s music falls solidly into the ‘quirky-pop’ category, with a light dusting of folky arrangements. So, from the start, there are melodies on ukuleles, steadily beating acoustic guitar adding rhythm and Tasha Robertson’s own cultivated quirky singing style which lies somewhere between Bjork’s speaking voice and a gulping childlike breathlessness. Similar then to Lucy Rose and not so very far from Kate Nash.

The songs all drift down a lightly melodic stream and are , on the surface, all concerned in different ways with love and relationships. So it’s disconcerting when the lyrics slide into the darker sides of life. ‘Hands‘ has Tasha Robertson attempting to comfort an abandoned and beaten child “I can hear your eyes / I can read your skin” she purrs, adding “You don’t need to talk to me…’cos we’ve got hands“. The title track is a pretty generic take on a “I love you, I wish I could make you feel better about yourself” song. The almost nursery rhyme lyrics of ‘Nicest Notes‘ suggests a paean of love aimed towards a baby – whilst ‘how did you get here‘ celebrates meeting that one person who might turn out to be just perfect.

If anything lets this release down it is the consistency of the playing and singing no matter what the song is about. Meeting a new fella sounds the same as intervening into a scenario of abuse – and both sound quite jolly which, surely, can’t have been the intent.  Tasha Robertson’s coyly girlish vocals are, as well, likely to split opinion quite strongly whilst the ‘quirky-indie-folk-pop’ arrangements also, rather ironically, sound over familiar.

Nicely recorded debut release needs more to distinguish it from the pack.