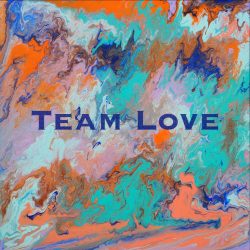 Team Love describes themselves as “Victorian Americana” which, as Steampunk as that sounds, in fact, means they hail from Victoria, Australia: Team Love are Ruby, Ruby, Monique and Shaun from Melbourne. These four string players, without a drummer or an amp between them, carve out a poignant acoustic place with only guitar, piano and fiddle.

After making a demo back in 2016, Team Love took their time and put out an EP succinctly entitled ‘Singles‘ last year before “suddenly” arriving with this, their debut self-entitled album. They have been slow to put things out, but this reflects their relaxed music. As artists as well as musically, they look and sound languid and reflective.
Awkwardly, the two singles from the album, ‘Running‘ and ‘Wasted Time‘, are far from representative of the album. The singles are the only songs which include drums and ‘Running‘ has a different lead singer. The singles are more traditional outlaw country and have a little more repetitive song structure. The ultimate song ‘Going Down (to the River)‘ is such derivative gospel-tinged soul that one might detect a hint of satire, with clapping and lyrics like “It’s another verse, it’s another rhyme how can it be wrong when it feels so right?” that simply must be sung with a country tongue firmly in cheek.
Team Love has a gentleness to their music, combining vocal harmonies, acoustic guitars, and fiddle and having the boldness to mostly leave out the drums and create appealing lullabies of love. The songs are simple and catchy, and the lyrics are solely cliches, but it takes guts to make something so universal and silly. Team Love is indeed an apt name for a record so sweet.

Acoustic Aussies tread the line between satire and sainthood