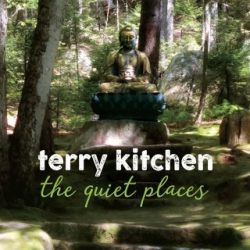 Terry Kitchen is a decidedly old-fashioned, storytelling folkie. He’s been plying his trade around New England for a quarter of century, so it’s safe to say he should know what he’s doing by now. Well-written, poignant and sometimes witty songs are delivered with confidence, backed by a handful of musicians adding dobro, trumpet and mandolin with fitting subtlety.

Opener Enjoy It Whilst It Lasts kicks things off in fine style. It’s probably the best track on the record; a lyrical recounting of good things ending too soon. It might be even worthy of the likes of Randy Newman or Loudon Wainwright. Kitchen has a  vocal style reminiscent of James Taylor, who one would imagine our Terry is quite familiar with. Similar pathos runs through Kitchen’s songs – Seeds tells of regeneration and new life springing from tired, dry ground. This isn’t in any way Nu-folk, which in a way is kind of a refreshing change. The Kid Behind The Wall is a Luka-esque tale of overheard but never seen child abuse. It could be levelled at Kitchen that his songs are a little ‘old hat’, content-wise. However, if he’s sincere in his song writing (which we can only assume he is), then it’s a minor quibble. Finally, kudos to the man for shoehorning an extremely lengthy song title into rhyme, with The Bar Harbor Full Sail Downeast Acadia Windjammer Sunset Cruise!