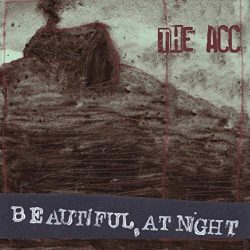 The Italian Americana scene is a bubbling, frothy affair and when mainstay band Lowlands dissolved, frontman Ed Abbiati got together with another of the mainmen of the scene – Stiv Cantarelli – and started to fashion some music shapes. Later on, Chris Cacavas, beloved keyboardist with Green on Red and many more, came on board and with a road hardened rhythm section featuring Joe Barecca and Antonio Pergini, the ACC were born and this is their debut disc. It is at the wild end of the spectrum – more Stooges than Sweet Nashville…

There is an air of 70s Stonesy looseness and sonic abandon to the songs. ‘Never Gave Up’ features growled vocals and a Crazy Horse garage band sound along with a lead guitar that stinks of Stampedro. The title track ‘Beautiful, At Night’ has a melancholy that seeps through the thrashed chords speaking of times past and things regretted.

The whole album is impressively raw (virtually every track springs into life from a feedback shriek) in these times of polished product and there is much to admire in the looseness of it all and the rough and ready texture of the production. However, perhaps it would have benefitted from a little more light and shade. Choosing gnarl over anything else is a demonstrably conscious choice if the other choices are clearly demonstrated. This album is too much of a one trick pony. It’s an arresting trick but needs leavening with some other colours.