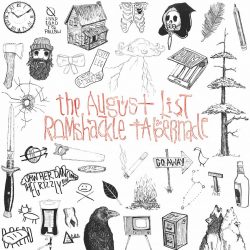 Husband and wife duo, Martin and Kerraleigh Childs or The August List as they’re known, return with their second release following 2014’s ‘O Hinterland’ which see’s them mature as songwriters and grow into quite the formidable duo. On first listen, the first track of the nine on offer, the bluesy ‘Old Rip’ sees The August List picking up where they left off however, immediately following that is ‘Palace On The Rocks’ in which the group experiment with an arguably louder, full-band sound which indicates a potentially alienating change in direction for the duo; however, they don’t feel quite as accomplished as the softer side of the band.

From the third track, the reverb-laden ‘Where Has All The Fire Gone?’, however, the record really starts to shine led for the most part by the vocals of Kerraleigh. The August List are at their best when they are producing soft, textured songs exploring a number of lyrical themes – this time around a number of tracks focus on a cast of historical characters. This isn’t to say that the songs don’t relate on a personal level as they are performed with an emotion that can only come from experience evident on early, personal track, the Noah and the Whale-esque ‘I Am The Teeth’ where the couple share lead vocal duties throughout. The track is also the first song in a three-pronged attack alongside ‘Connie Converse’ and ‘Half Light’, in which all three songs take a slightly varied approach whilst still maintaining the cohesive sound of the group and also marks the standout point of the album. ‘Connie Converse’ is an upbeat folk number telling the story of a disappeared 1950’s songwriter and ‘Half Light’ is a waltzy, upbeat song displaying the diversity that the group are capable of pulling off seemingly with ease and confidence. The album’s climax, ‘The Ballad of James Lucas & Betty Dupree’ is a perfect way to finish the record and is sure to become a live favourite with it’s simple, yet effective, acoustic guitar and vocals set up accompanied by the ‘Tabernacle Choir’ (consisting of The Great Western Tears) setting the song up for some brilliant audience interaction when they perform it live.

Production wise, Ramshackle Tabernacle can be a little hit and miss – the instrumentation is superb however, sometimes the drums can feel a bit flat which lets the record down in some places, in particular, on ‘Palace In The Rocks’, on the other hand, when they are used to create atmosphere as opposed to being the driving force behind the band, they really bring the tracks to life. The main focal point of the record however, are the intertwining vocals of both vocalists which are always at the forefront of the mix which gives their pitch-perfect harmonies the spotlight they deserve. It isn’t uncommon for a duo’s voices to really compliment each other and The August List no exception to that and in particular, on tracks like ‘Wilderness’, where Kerraleigh’s eerie harmonies accompany the track perfectly the chemistry between them is at it’s most evident.
Overall, Ramshackle Tabernacle is a brilliant album and shows all the signs of a duo that are becoming more comfortable with their sound and what they can produce together and following this release, should be well one their way to seeing the success they deserve.