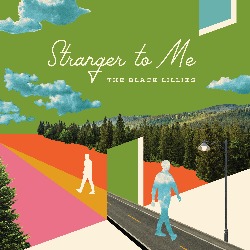 What’s striking about ‘Stranger to Me’, the fifth album by The Black Lillies from Knoxville, Tennessee, is how tight it’s all sounding: they’ve had a bumpy few years. Multiple line-up changes (going from a six-piece to four), the loss of all their equipment in a robbery, and a shift in responsibilities across the band (previously Cruz Contreras operated as sole front man, singer and songwriter, he’s now ably joined by Sam Quinn (The Everybodyfields)).

Album opener ‘Ten Years’ is a comfortable country rock number with a catchy chorus. It sets the scene for some of the more up beat tracks throughout and provides a strong outlet for Dustin Schaefer’s guitarwork. The quirky, bluesy ‘Midnight Stranger’ follows sharply. Contreras is clearly having fun with the lyrics: “Midnight stranger, tight pair of wranglers, tickets to New Mexico, Sweet sangria on Catalina, Take your chances with the midnight stranger.”

Contreras can deliver a strong story through his material with such honesty, it feels likely that most (if not all) of the album is based in truth. ‘Out of the Blue’ tells of a random call from an ex-lover with “Angel eyes and a devil’s grin” and the chance to lament what could have been in a bar. At the other extreme, Quinn pens words that are in equal parts delicate and desperate: on indie-rock track ‘Weighting’ he sings of “a porcelain doll made of human skin, scares the living shit out of me”.

The glorious ‘Ice Museum’ is another case in point, this time a richly layered meander through harmonies reminiscent of The Beach Boys. Contreras plays a soothing piano while Quinn delivers paranoia: “nobody is waiting no, nobody is waiting, at home, write me a letter and send it where I never go”.

With ‘River Rolls’ and ‘Don’t be Afraid’ we’re in more familiar Americana territory. Arguably safer outputs in the context of the album as a whole, but solid nonetheless. There’s a real step-change with ‘No Other Way’ and ‘Snakes and Telephones’. Both are much more contemporary in feel, with ‘Snakes’ in particular delivering an almost psychedelic sound through its use of slide guitar.

There are some beautiful acoustic ballads in ‘Earthquake’ and ‘Someday, Sometime’ (by fellow Knoxville songwriter Scott Miller). The latter, particularly, showcases the three-part harmonies (between Contreras, Schaefer and Quinn) that are such a feature of this album.

In some ways it’s ironic that the album title is ‘Stranger to Me’ as there are enough tracks here that feel familiar. Thankfully, The Black Lillies have not been afraid to push beyond their comfort zone. The result is a varied album grounded in Americana and blues that is rich in harmonies and melancholy.