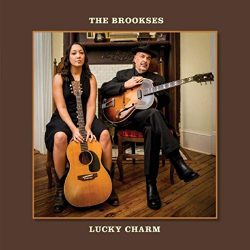 ‘Lucky Charm’ is the debut LP from Atlanta-based father-daughter folk duo The Brookses and a fine introduction it is too. Dad Jim is a veteran of the Atlanta music scene and he is joined here by daughter Meg, and together this pair have crafted a multi-layered album that slowly draws you in.  On first listen it all seems a little underwhelming, but stick with it and their music will slowly wend its way under your skin and reveal the nuanced complexity of their offering.

The album title is a track that Jim wrote some 30 years ago and subsequently left in hibernation and he stubbornly refused to include it on the Brookses’ LP unless his daughter sang lead. With Meg jokingly reflecting that the song was the same age as her and recording live in one room at Standard Electric Recording Company with producer Damon Moon at the helm, what has emerged is a nicely balanced ballad with Meg’s voice blending perfectly with Jim’s excellent guitar work.

It wasn’t just ‘Lucky Charm’ that was tracked live – the whole album was recorded that way and that’s what adds to the appeal.  The overall texture of the album feels like a throwback to the pre-digital days and Jim’s archtop guitar adds a wonderful ambience to many of the tracks.

Equally important are Meg’s vocals. “I remember when Meg’s voice changed,” recalls Jim, “I noticed something different when we sang together.  The way our voices harmonized–like the Everly Brothers, the Louvin Brothers, the Carter Family–there was something about our voices working together that was completely different from harmonizing with anyone else.”

The 12th and final track on the album ends with the excellent ‘The Bridge’ and somewhat ironically this was the first song that emerged as Meg took her first tentative steps into song writing.  Jim continued, “Because she’s my daughter, I wanted it to be good, but as a musician I still had that built-in ‘shit detector.’ You have to be honest with musicians. And I was, honestly, really impressed.” And so he should be.  ‘The Bridge’ is one of the best tracks on the album with Meg clearly enjoying herself as the song , with its country vibe, bounces along nicely. Meg is no one-trick pony though and she also contributed with the slow waltz time ‘Little Miss Raincloud’ and the blues based ‘Black Magic’, both excellent tracks.

Aided by the live tracked recording, The Brookses have created a fine debut that effortlessly glides between musical genres and the result is an intimate album that simply seems to grows on you with repeated listens.

An engaging album that evokes memories of simpler times