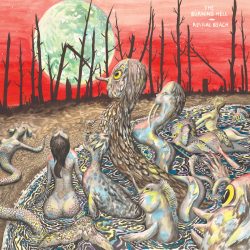 It’s the apocalypse, how did it happen? Well this portmanteau from the ever reliable Burning Hell approaches it (the end of the world as we know it) from multiple angles drawing out the humour, the tiny individual tragedies and the sheer banality of the world ending without announcement, life just stopping. TBH have never stood still and on this eighth full length they’re down to a trio but the musical boundaries continue to expand, from the storytelling of Nurse & Patient to the clarinet and bouzouki led Race to Revival Beach. There are reminders of their agit-folk roots with Friend Army, which somehow makes me think of Orange Juice.

Listening to Minor Changes reminded me sharply of Kurt Wagner, the deep resonance of the voice and the wispy restrained backing redolent of the early Lambchop records. Modern mores are mined with Troll with some lyrical and vocal gymnastics, and if the end of the world did come there would be those hunkered down posting their self-involved criticisms on social media – somehow the apocalypse wouldn’t quite be as good as they would make it. Their songs of love continue to develop and The River (Never Freezes anymore) is another entry into the catalogue, a gentle nostalgic tale that finds a guitar break that kicks a smile to my face.

The Last Night locates the apocalyptic (lack of) action in an empty bar, the clarinet and bouzouki again providing a lyrical atmosphere as the barman sweeps up destined to never benefit from the forthcoming smoking ban (the irony), lives ending as banally as they began. Supermoon gathers all of the characters together at Revival Beach as the world nears its end, the soundtrack a duet, locating the silver lining, no more work, let’s dance to the funky bassline. It wouldn’t be a bad way to go.

The apocalypse has never sounded so good