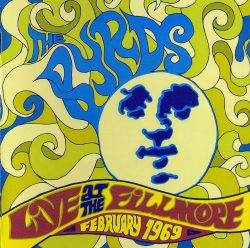 to have been there – February 7th and 8th 1969 at Bill Graham’s Fillmore West! The irony is that The Byrds were a warm up act on this occasion, a sound check for others including Paul Butterfield, and just happened to be recorded by the Columbia engineers who were there and thankfully the tapes were kept. This is a fantastic record of one of the great bands in their 1960’s country rock heyday featuring the line up of Roger McGuinn on lead vocal and guitar, John York on bass, Gene Parsons (not Gram!) on drums and one of the truly great guitarists and innovators Clarence White whose distinct style shines through here and really lights up the performance.
For Byrds fans who loved Sweetheart of the Rodeo the set list is a dream featuring You’re Still On My Mind, The Christian Life and Pretty Boy Floyd by the legendary Woody Guthrie, plus many others in that style. The hits are featured including So You Want To Be A Rock ‘N’ Roll Star and a medley involving Turn! Turn! Turn, Mr Tambourine Man and Eight Miles High lasting nearly ten minutes with a guitar solo to die for by Clarence White who was tragically killed by a drunk driver at the age of 29 leaving music all the poorer.
Roger McGuinn’s vocals are on top form and there are a few instrumental tracks thrown in for good measure which gives the whole record a rounded feel. The sound quality is not perfect but good enough considering that it was 1969 and probably not involving the cutting edge equipment of its day. But it is the feeling that is important here and what a feeling you get listening to a performance that is both understated and top quality at the same time. A real gem and a must have for lovers of the pioneers of early country rock.
9/10

A lost gem from country rock pioneers at the top of their game.