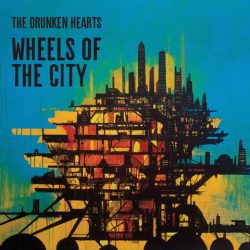 For those who aren’t acquainted with The Drunken Hearts, you could think of them as super-charged Eddie Vedder Americana-Rock. Their 2nd full length album ‘Wheels Of The City’ which is currently available on LoHi Records, was imagined at Silo Sound Studios in Denver with producer and ‘Railroad Earth’ member, Tim Carbone. For this record, the band tried something new, focusing on creating and recording a new song every day until the full album was realised. Whether this was pulled off or not, we find out as we delve in…

To kick things off, ‘Fire In A House’ brings something a little reminiscent and allows us to grow familiar with the likeability of vocalist Andrew McConathy’s voice. His distinctive and coarse tonality is sure to please listeners and carries the lyrics with intent. As with the following track, ‘Shining Eyes’, it makes a great example of melodic work from guitarist Kory Montgomery who, alongside Cody Russell on Pedal Steel, Dobro and Lap Steel manage to exercise their musical prowess well. Further tracks to listen to for those hardcore fingerpicking fans include ‘Run It All Together’, ‘Wheels Of The City’and ‘In The Middle’ with its super infectious groove that gets right under the skin.

As we move onto ‘Alive ‘N Free’, we recap on that sense of optimism that underlines the album. As the song carries through, though, the structure becomes fragmented and begins to wain and with this the chorus feels a little lost. Perhaps it’s supposed to bring some fresh life to a worn out way but without lending to the song it becomes confusing.

Similarly with ‘Unrest’, where the rhythm section is driving home, the solo section disrupts the momentum. It begins with such great clarity, the vocal line has great strength and room, carrying much freedom to the melody but then as it reaches the chorus, it becomes very linear, pitches down and, as with the rest of the album there is no harmonisation to reinforce it as a chorus. Songs such as ‘Passchendaele’ and ‘The Cave’ feel a little less imaginative than the lads have previously shown cable of and you begin to wonder whether the album would have been better served as an extended EP to really highlight their best.

That being said, there are many points of interest in this record and moments of brilliance wash over in the horn section of ‘Wheels Of The City’ as well as in the opening guitar lines and the tenderness of the lyrics. Points like those show what the band are capable of and with just a little more cohesion will be sure to bring a flawless album. Having watched live video content of the boys, their years of togetherness shine through and alongside the nature of their genre, would be sure fun to watch live.

Americana-Rock with moments of magic