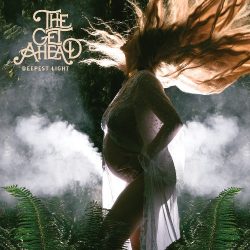 The ‘Deepest Light’ from Portland-based quintet The Get Ahead, is a difficult album to categorise. Embracing the sounds of americana by way of some floaty ’70s disco rock: songs catch you unawares. Not overly disconcerting, it all keeps you interested and wondering where they’re taking you next. The variety of genres in The Get Ahead is in part due to the unique makeup of the band. Comprising two married couples, Juliet Howard and Nathan Earle (who leads on vocals) along with Angie (sax, violin and backing) and Danny Johnson (drums). They are joined by friend, Sean Farrell (bass). The resulting three-part harmonies underpin some of the band’s most delightful tracks.

There are themes of family and unity throughout the album, iconically brought together by the image of a heavily pregnant Juliet Howard in a misty woodland on the cover art. Album-opener ‘July Moon’ is filled with a funky sound, stripped back to percussion to start with, then building that flower power vibe with harmonies and violin. The lyrics reflect a west coast feel: “When the July moon meets our horizon…we will all go home with stars in our eyes”. This track is so laid back it’s almost horizontal.

There’s earworms a-plenty in this album. The hypnotic refrain of ‘Break’: “you can’t break a heart that’s already been broken”swirls around in your mind to a backdrop that’s almost reggae-like. Title track ‘Deepest Light’ is a funky ’70s number. The saxophone and rich bass makes you want to get up and dance. In ‘Special Breed’ it all seems very summery and soulful until it’s clear this is a one-night stand gone bad: “We had a good night of drinking but if you think this is something, you’re a special breed”. Again, super catchy.

‘Paper Tiger’ is by far the heaviest track on the album. This gives Earle the opportunity to go all out with a powerful and rocky vocal. Opposite in style is the folky, acoustic ‘Peach Tree’, again though Earle’s vocals shine through – rough, gritty and heartfelt.

Overall, ‘Deepest Light’ is a pretty surreal album. Melodious, funky and featuring some gorgeous harmonies, it’s the right mix of soul with a healthy dollop of old folk music. It gets into your head and makes you feel nice though: all good.