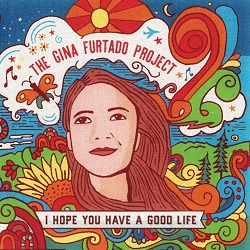 You may already know Gina Furtado as Gina Clowes, banjo player for Chris Jones & The Night Drivers – and even a cursory listen to ‘I Hope You Have a Good Life‘ will explain why she is now recording under her maiden name. This is unmistakably a breakup album, although Gina Furtado has mostly spared us the miserable side of a divorce – there are no arguments, no recriminations, no period of emotional mourning. Instead the positivity of the title is reflected into songs that, on the whole, look optimistically to the future as a new chapter begins.The Gina Furtado Project fits easily into a ‘new-old folk’ category – alongside bands like The New Students – with music that draws a clear inspiration from the sound of the leading pop-folk bands of the Sixties.

Opener ‘The First Pebble‘ is a fine modern bluegrass which lays out the musical template for the album, and quickly deals with the end of Gina Furtado’s marriage as she merrily sings “I took the first step a garden grew / took the second step I’d forgotten you“. Things have moved on by the reflective ‘A Man Like That’ which identifies an ideal of the perfect partner, whilst leaving the space for Furtado and fiddle player Nate Leath to provide suitably sensitive solo’s. Regrets are a distant memory by the time of the light hearted and jazz influenced ‘Take Your Time (I’ll be Fine)‘ which has Furtado weighing up the possibilities of every man in the bar whilst waiting for a late running date. The instrumental ‘Princess and the Pea‘ allows the whole band to show off their considerable prowess – Furtado’s banjo naturally attracts the ear with its rapid fire and clarity but the aforementioned Leath and mandolin player Danny Knicely take very listenable breaks themselves, whilst bass player Mark Fain keeps everything grounded.

The sparse ‘Story of an Artist‘ sung to just Furtado’s own banjo accompaniment carries the hint of the autobiographical as it unfolds a tale of societal criticism which makes for a portrait of the downside of the artistic urge “everyone in friends and family said ‘Hey get a job. Why do you only do that only ? Why are you so odd? We don’t really like what you do, we don’t think anyone ever will, it’s a problem that you have and this problem’s made you ill“. In its justification of the need to create and not just be lulled through life by soporific media the song feels like a riposte to a distillation of every critical remark that has ever come Furtado’s way. The anger that comes through on ‘Shame‘ as Furtado rails against privilege and power refusing to help those less fortunate shows that bluegrass, as much as any other music, can be a vehicle for protest without losing any of its musicality and drive. So, there are thrilling banjo licks, but there’s also a tongue lashing “You can turn you back and say ‘Can’t save them all ain’t that a shame’ / Ain’t that a shame“.

Album closer ‘Can You Picture That?‘ reworks the Dr Teeth and the Electric Mayhem song into the Gina Furtado Project’s folk-bluegrass sound, and raises the hoary old question about humour in music. It comes down to how much one appreciates fiddle playing that replicates turntable scratching, and the band doing Muppet impressions – it’s a narrow divide which will lead to ‘Can You Picture That?‘ being regarded as either jokey fun or a tedious waste. Overall though, if you are modern bluegrass inclined then this is an album you’ll likely to want to be listening to.