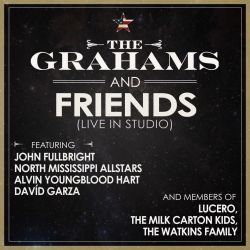 If you were to judge an outfit by their friends this American husband and wife duo would rate pretty highly.  On this set they rope in Cody & Luther Dickinson from the north Mississippi Allstars, John Fullbright, Sara & Sean Watkins, Kenneth Pattingdale from Milk Carton Kids and Alvin Youngblood Hart to name but a few.  Of the fourteen songs here five are taken from the deluxe version of their second album “Glory Bound” (not previously available in the UK) with the remainder coming from “Rattle The Hocks”, a live album and documentary they produced in 2015/16.

As you’d expect with that cast the playing is exemplary, energetic and upfront with Alyssa’s full-on rocking vocals driving things forward with panache.  Opener Glory Bound sets the tone, a full on track that would set the dead dancing.  Gambling Girl rocks like a demon, the gospel of Mama uplifts, the gentle lope of Biscuits soothes and Steve Goodman’s City Of New Orleans is given a surprisingly effective ragtime/oompah treatment.

This is the sort of cast you’d pay a lot of money to see and hear and this is an impressive set with plenty of swagger and sass.