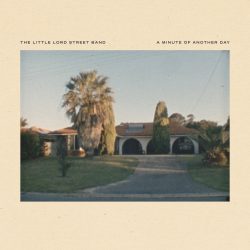 After six years of touring, a handful of well-received EP’s, and three West Australian Music Industry Awards for Best Country Act, Perth’s The Little Lord Street Band have finally released their debut album ‘A Minute of Another Day.’ The alt-country folk four-piece, along with West Australian songwriter and collaborator Bri Clark, have created a stylistically diverse scattershot group of songs that run the gamut of moods and emotions. The project began in 2017 and 2018 at the APRA Songhubs workshops. ‘Frankies Back in Town’ sets the bar rather high for the rest of the album: a vibrant, elated track about a woman’s long-anticipated return to her hometown. It’s easy to wonder what happens next in the story.

Main songwriters and partners Natasha Shanks and James Rogers have created lyrics that are mature and philosophical, written from the vantage point that only reaching a certain point in life can provide. There’s love, of course, but there more to regular people’s lives than that; there’s loss, second thoughts, self-doubt, struggling to maintain long-term relationships, and the poignancy of watching young children grow up. Rogers’ versatile vocals are at times reminiscent of Neil Finn’s and Tom Petty’s. It’s the Petty wryness that comes to mind as Rogers expertly tackles misogynists on the brilliant ‘Who Am I.’ He also empathetically describes an alcoholic’s well-hidden personal torment on ‘At the Bar,’ and ponders life and regret on ‘Minute of Another Day’: “Can’t keep up with the rock and roll lie / My hangovers hurt and I feel the cold. / Because a wasted weekend is all I’ve known / I’m coming to terms that it’s time I go slow.”

Shanks’s voice often comes off as too thin on its own, and instead of sounding fragile and honest on an emotionally difficult song like ‘Through the Night’ (about a woman confronting an abuser), the lack of backup vocals unfairly makes her sound almost reedy. This isn’t a problem on duets with Rogers or on the gritty, worldly-wise letter to her younger self, ‘Setting Your Tale on Fire.’

The overall musicality is impressive, but the fierce slide guide on ‘Setting Your Tale on Fire’ is by far one of the best things about the album. Similarly Belle Harvey’s mandolin and harmonica provide excellent touches. ‘Oakland’ includes an appropriately heavy Brothers Osborne-style guitar, and somehow manages to cast a gimlet eye at that gentrifying but still rough Bay Area city’s problems without being overbearing.

It might be late in the day for everyone to have a complete life makeover, as Rogers sings in the title track (“I’ve got no money and no place to be / I’m a little too old to be chasing some dream”), but it’s not too late to enjoy more minutes of every day left to all of us. ‘A Minute of Another Day’ is an uplifting, positive debut from a talented, young but seasoned Australian band.