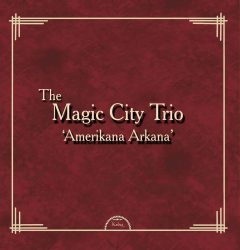 s is a somewhat quirky but truly original offering from London based group The Magic City Trio who, according to their website take their inspiration from pre-war country music, The Carter Family, through to modern hillbilly noir found in the novels of Daniel Woodrell. The band comprises Frank Sweeney (Guitar, Vocals and Harmonica), Annie Holder (guitar, vocal and kazoo) and Adi Staempfli (bass and vocals) and it seems that they have written at least some if not all the ten tracks that comprise the album. That being the case they have indeed been seeped in the music as the songs are intelligent, original and authentic. The opening track ‘Black Dog Following Me’ will immediately take you to the opening scene of a spaghetti western such is the sound landscape that accompanies this clever track about mental fragility.

‘Goodbye My Friend’ is a duet in the gospel style of the deep south with a great steel guitar accompaniment throughout and there is a proper murder ballad about a seemingly upright local man who is responsible for the death of a22-year-old girl aptly named 22 this time with a Mexican theme having brass and a rather jolly piano accompaniment.  Other familiar themes are explored with ‘Dust Of Mars’ appropriately being about dust bowl issues and the need to move on from the country to the town in search of work and a better life with ‘Prayer For Hope and Happy Times’ being a Ring Of Fire style track delivered in a suitably low Johnny Cash / Lee Marvin vocal.

Ultimately there is hope with the final track ‘Sun Comes Shining Through’ which is an interesting fusion of steel drums, twangy country style guitar and lounge style rhythm. Certainly unique and demonstrating the many of influences that the band have embraced.

Unique take on Americana from London based trio showcasing a range of influences.