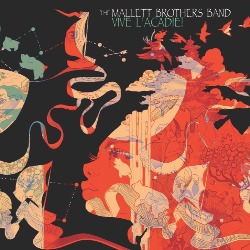 Can you ever have too much whiskey? Well, probably, but not if you are in The Mallett Brothers Band. The tracks on ‘Vive L’Acadie!’ are steeped in it. For a band from Maine, it’s just as easy to imagine them propping up the bar in the deep south. Their sound is unashamedly country rock and they do it really well. The Mallett Brothers Band at their core are brothers Luke and Will Mallett who formed the band in 2009. Since then they’ve gone through numerous line up changes but have settled on a strong musical range for this latest album with dobro, fiddles and mandolin being used to underpin the sound throughout.

There’s some straight up, no messing songs like ‘Gettin’ Back’ – at its heart a rocking singalong with a catchy hook: “there’s one last chance I ain’t ever gettin’ back, I ain’t ever gettin’ back again” presented Mallett Brothers Band style with electric guitar and fiddles. Similarly, ‘Timberline (High Times)’ is a fast-paced track about working class people keeping their chin up – it uses the fiddle and drums to keep the momentum.

There are a couple of points on the album that show how diverse The Mallett Brothers Band can be. It’s not often ZZ Top meets a cajun hoedown but that’s exactly what happens with the rollicking ‘Good as it Gets’ and ‘Vive L’Acadie!’

There are also some more delicate moments dotted throughout such as ‘Long Black Braid’ which gets us back on the whiskey with a sad song about a barmaid’s death. The drinking continues in ‘Too Much Trouble’ – there’s “too much whiskey in this glass”. The song is also a comment on the problems in the world today.  ‘Few More Dozen Roses’ references tributes left by the roadside to those who have lived fast and died young.

The Mallet Brothers Band deliver gutsy country rock, but it’s their ability to craft stories and mix up genres that creates an album which really hits the spot.