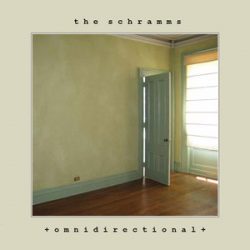 Dave Schramm genuinely fits that over-used expression ‘a musician’s musician’. Perhaps he’s best known as the lead guitarist on Yo La Tengo’s first releases, including their acclaimed debut album ‘Ride The Tiger’. He has since returned to his old band to help them out on 1990 album ‘Fakebook’ and 2015’s ‘Stuff Like That There’. In addition, Schramm has done session work for The Replacements, Soul Asylum, Whiskeytown, Richard Buckner and Freedy Johnston, amongst many others. The one consistent element though has been his own band The Schramms.

‘Omnidirectional’ is The Schramms’ seventh album. The band’s debut album ‘Walk to Delphi’ was released in 1990, so they have hardly been prolific. ‘Omnidirectional’ itself comes nearly ten years after its predecessor ‘100 Questions’. It was recorded over that ten years whenever the band could find time from other commitments to come together. Although that might sound like a recipe for a disjointed and inconsistent affair, the album holds together well with no joints or seams showing.

The album’s opening track ‘Honestly Now’ starts with a gentle acoustic strum which builds to an electrifying crescendo before slowly fading away again. These changes of volume, intensity and pace are a feature of a number of the songs on the album. That’s not to say the band follow a single template. The wonderful ‘Faith is a Dusty Word’ recalls The Beach Boys at their most creative whilst ‘Won’t Fall Down’ is almost a country toe-tapper. The sequencing is perfect and creates a musical soundscape that truly adds to the listening experience. The only thing missing is a ‘Do Not Shuffle’ sticker.

‘Omnidirectional’ is firmly at the rock end of the Americana spectrum. It is also at the creative and literate end of the rock spectrum. Trying to come up with a comparison or some points of reference proved fruitless. The Schramms have created a record that is uniquely their own. Having lent his talent to so many other artists over the years, Dave Schramm has made a record that stands alongside anything else that he has done or contributed to. Although a well-known name in certain musical circles, this record has the perceptible sense of a man emerging from the shadows to make a real statement. ‘Omnidirectional’ is an exceptional record that deserves to be heard.

A decade in the making, The Schramms release their finest record yet