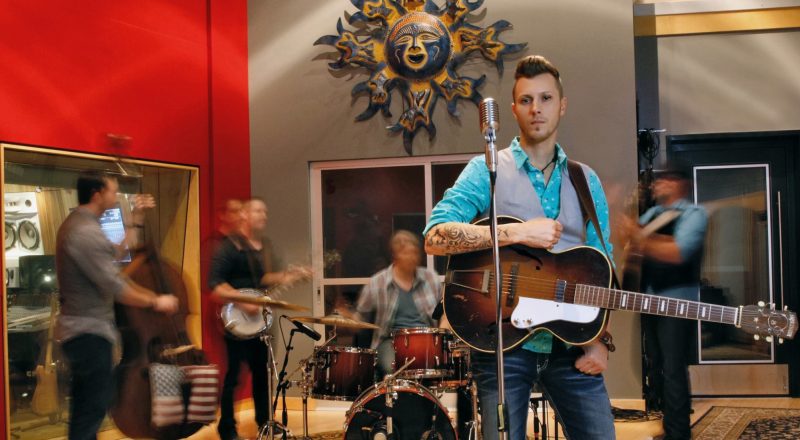 It’s a bit disconcerting for someone from this side of The Pond, to drive through The Smoky Mountains National Park in Tennessee and North Carolina, and all of the natural beauty that entails, to arrive in ‘downtown Gatlinburg’, which makes Skegness (insert UK seaside resort name here) seem restrained. That was where we found ourselves in mid-May. The shock to the system was tempered somewhat by a chance encounter with the band, Monroeville who were playing a free gig outside a local Moonshine emporium. As you do. I have to say that I thought they were fantastic, and afterwards had the briefest of chats with Matt Munsey from the Band.

Firstly, Matt, although I know where the name of the band came from, can you tell me from your perspective?
There are more than a few Monroevilles dotting the map from Pennsylvania to Alabama, and our most frequent question is if we are from a Monroeville or Monroe County Tennessee. The name is a tribute. We all have been influenced in some shape or form by bluegrass music.

The pioneer of the bluegrass sound was Bill Monroe. He was the father of the genre. He created a sound completely unique by combining the influences around him. That sound he created is still around today. He was determined to sound original. That sound influenced who we all are as musicians so much that we wanted to pay tribute to his music, but mostly his mentality of originality.

The more personal account of how the name Monroeville came about was after our first gig together. We had recently left a band that we had all worked together in, and were riding the bus back home trying to decide what name we wanted to give our new endeavour. One of the band members had the idea to look through an atlas of the United States for inspiration. A few names had been tossed around, but when he threw out the name “Monroeville,” we instantly knew it was right.

Can you introduce us to the band?
The band lineup has changed a lot since that first gig in 2010. Currently, I am the only one left of that first lineup. Each person that has come into the band has left a specific stamp on the sound, but the current lineup is by far the most associated with Monroeville’s originality. I am the original founding member of Monroeville and play Mandolin. McCoy Borg came on in early 2013 and has earned the title of longest-standing member besides myself. He primarily plays the banjo, but he is our utility guy that can play almost any instrument.

Paul Watson is our bass player from North Carolina. I found him through his cousin, Chevy Watson, who is our guitar player. They grew up playing music together. I hired them both around the same time in the Summer of 2015. Interesting fact. I hired Paul before I hired his cousin Chevy, but because our guitar player left sooner than expect he started a week before Paul did! Our drummer has been the only one Monroeville has ever had. His name is Evan Pitchers and he is originally from St. Louis, MO. We started working remotely with him in 2014, but it wasn’t until he moved to Nashville, TN in 2016 that we could gig with him regularly.

Next up, musical influences, other than Bill Monroe!
Musical influences vary A LOT! Obviously, bluegrass and all of its shapes and forms influenced each of us a lot. Some of my personal influences involve 90’s Alternative. Artists like Rob Thomas and bands like the Goo Goo Dolls left a deep impact on my preference for music. Country music has went through a lot of phases, but they have all influenced my to various degrees. Without speaking for them directly I can tell you some of the stuff each one likes to listen to.

Chevy likes metal music. He is a fan of Slip Knot, but he likes a huge variety of music. He really likes deep arrangements that involve a lot of parts. His brain works that way and he is probably the closest to a classical composer in the band.

McCoy grew up in the 90’s and loves alternative music from that era. He likes simple hooks and catchy riffs. Because we are all such technical players, this helps ground us from getting too complicated in our arrangements.

Evan was influenced a lot by James Taylor, Manhattan Transfer, and Huey Lewis and the News. His ability to map out the progressions of songs is amazing and probably comes from his upbringing. His family are all amazing musicians and singers.

Paul is a bass player. He loves music that features good beats and heavy bass lines. He would tell you Motown is one of his influences and you can hear it in his playing. He also likes a wide variety of stuff from Country to R&B. All of these influences come out in their playing. Does being relatively close to Nashville help or hinder the band.

Does it give you access to more places to play or are there so many bands hoping to ‘make it’ that it is possible to get lost in the crowd and overlooked?
Nashville is a tough place for sure! When I started this band in 2010 I lived in Nashville. We did showcases for CMA and the International Bluegrass Music Association there as well. Then moonshine happened. In 2010 the Ole Smoky Moonshine Distillery opened up in Gatlinburg, TN. I had played in Gatlinburg since the early 2000s but it was thought because you mostly just played for tips. When the Distillery opened, they paid us to play, and I’ve been there ever since. We decided it would be better to be a big fish in a small pond than to try to compete with the huge number of people trying to “make it” in Nashville.

What is the largest concert you’ve played and how much of the US do you travel to, to play? is it countrywide or confined to a few States?
Our travels have taken us as far west as Colorado and all the way up and down the East Coast from Vermont to Florida. We regularly work in East Tennessee, but are touring more often now that our popularity is growing. We have a large fan base in Ohio and Indiana. Lots of the states surrounding Tennessee visit Gatlinburg and the Smoky Mountains. There are four million people a year alone that visit Ole Smoky Moonshine Distillery where we work. That allows us to gather fans from all over the world. We are trying to figure out how to tour more. It’s just hard to make a solid living touring. Playing here we get to be home every night.

And to finish off with that old interview question favourite, where do you see yourself / the band in 10 years time?
In 10 years I see Monroeville still playing regularly. We have such a passion for playing music. That’s what allows us to play 5-10 hours a day of shows at our current rate. I see us cutting back the amount of shows we are playing now over the next few years. That will happen as bigger and better shows come in and we can play a lower number of shows without loosing income. We just love creating music and especially love doing it together. Monroeville is nearing the ten year mark now.

Our beginning was in September, 2010. These years have shown us a lot. None of the guys here now were there in the beginning except myself. Bands have a lot of turnover and Monroeville has not avoided that, but the guys here now have been here longer than any other previous members. McCoy is only the second banjo player I have had and is nearing seven years with the band. As the next ten years unfold I see us growing as musicians and performers. When you love what you do and challenge yourself to be better, you will grow to places you never thought you would achieve. I can look back over the years and remember the walls or “plateaus” in my playing or singing that I never thought I would pass. Now, I see that consistent work and time is the only way to excel past those hurdles. I’m at a level of playing and singing I never thought I would achieve and still have much much more to learn. Now, with all of the members adding songwriting to their list of skills, I see Monroeville recording better and more relatable songs that could possibly reach an audience the size of which we never imagined.

Thanks Matt, its been a pleasure to conduct this interview, all the best for the future. Hope to see ‘Monroeville’ in the UK at some point.