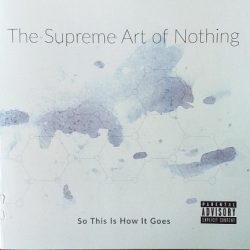 The Supreme Art of Nothing are a musical project created by Nico and Andi Crutwell-Jones. Both are seasoned music industry professionals with separate and varied careers. Whilst Andi has been a writer, composer, musician and sometime actor, Nico is an in-demand session violinist. Some readers may also recall her playing that instrument in the 90’s Liverpool band ‘Pele’. The result is a very polished album of catchy, anthemic songs that you can clearly visualise being raucously sung along to on a car journey or belted out with great gusto at a summer festival.

Musically the album might equally be filed under ‘indie’ or ‘folk-rock’ in your local record shop. You can hear influences such as The Waterboys and Springsteen, but equally the slick stylings of The Killers or The Gaslight Anthem are equally prominent. Andi’s voice and phrasing is almost purpose-built for the hook-filled and well-worn blueprint of the songs, whereas Nico’s violin injects a more folky feel that accords their sound a bit more individuality.

Despite having done a really professional job in creating what is potentially a very successful album, there are a couple of caveats that need to be added. Firstly, there is some inconsistency. Songs such as the title track ‘This Is How It Goes’, or others like ‘Backpack’ and ‘My Life Crisis’, fit the mould of the kind of populist numbers at which The Supreme Art of Nothing excel. However, when they stray too far from that formula, they tend to fall a bit flat. The duet ‘God’ is messy and overblown and the piano and strings ballad ‘Deep’ is rather laboured. Secondly, this is not an album that is creatively or artistically going to break down barriers or open new doors. That’s not necessarily to belittle it, they do what they do very well indeed. However, where the finest chefs will create their dishes using the added ingredients of spontaneity, inventiveness and inspiration, with this album The Supreme Art of Nothing have stuck very much to a trusted recipe.

A very slick and professional debut fails to ignite the soul