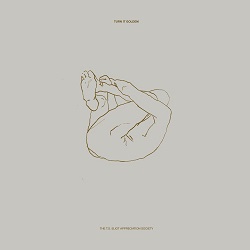 Tom Gerritsen (a.k.a. The T.S. Eliot Appreciation Society) proffers a back story which invites disbelief – born into a travelling carnival he abandoned the carny life to write songs whilst working in a bookshop before taking said songs on an extended two year long busking tour of North America. Well, I’ll buy the bookshop – many of Gerritsen’s fantastical songs are undeniably literary in style, with The Grand Tour also showing the hallmark of a man who has had to read Where the Wild Things Are to a fidgety bunch of toddlers, restlessly sitting in the children’s corner, just one too many times. His world conquering ambition takes him to “an island that no human eye had ever seen / the inhabitants had eight hands and on every finger a ring / and when I finally finished kissing them they said ‘Tom will you be our King?’ ” and then onwards, through child sacrifice and poisonous lies of easy wealth, to a new and all-encompassing religion. Ego fantasies all aimed at making the “world a bit more bearable”.

This sophomore album is claimed to be less stripped down and folky than the debut from The T.S. Eliot Appreciation Society. In that case the first album A New History must be incredibly sparse as the predominant style on Turn it Golden is spare but effective folk style guitar with just Gerritsen’s slightly tremulous vocals, with a touch of echo applied. Occasionally it’s only finger-picking: like the country-bluesy opener Anne’s Lullaby which is far too raucous to lull anyone to sleep, but does show off Gerritsen’s playing nicely. Holy Motors is the album’s tour-de-force, starting from a low key drunken wandering through snow to find that the “happiest moments in time tend to happen whilst drifting on a sea of sleep”. The second repeat of this sentiment shifts into a dreamlike journey as knocking on a door sublimates into the sounds of a creaking sailing ship before the tune concludes with a Decemberist’s like shanty coda, perfectly capturing that hazy feeling of half-awake and half-asleep with the real world encroaching into the internal world.

It might take a few listens, but once you’re in synch with the broad stroke dreamscapes that The T.S. Eliot Appreciation Society deals in then there’s a lot to admire on this album which intermittently dazzles like the embers flying up into the darkness from a dying night time fire in a wintry forest. There’s that feeling of there being just a fragile and frail space between knowing where you are and being lost in a huge and uncaring world, with that frisson of fear touched with a glamour of little golden lights.