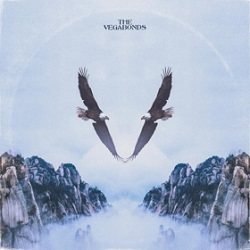 ‘V‘ is, unsurprisingly, The Vegabonds fifth album and also their first for their new LA based label. The Vegabonds have been playing for some ten years, gaining a following on the college circuit in the Southeastern States of the USA. Their brand of rock is similarly rooted in straight-ahead Southern Rock, which has seen them open for Lynyrd Skynyrd and Gregg Allman amongst others. And, after five albums they certainly know what they are about musically – with lead guitarist Richard Forehand an anchor for the band to build around.

Which all sounds great – and it does sound “car radio great” – but there’s the small matter of the lyrics. Opener ‘Partyin’ with Strangers‘ sums up the problem here – it’s a lost love song, where, Daniel Allen sings, the girl has gone off with someone else “out in a crowd / under someone else’s arm you looked so proud” and is “partying with strangers / and drinking clear liquor on the hood of a car“. That’s girl, drinking, and car – throw in a dog and a cowboy hat and you’d have the unholy royal flush of pop-country. Still, maybe that’s an aberration. ‘Generation of Happiness‘ launches off like a battlefield explosion and the promising opening couplet “He signed up yesterday for the National Guard / Got a baby on the way and working two jobs“. There’s a nice My Morning Jacket feel that even allows a sideswipe at millennials obsessed by their ‘phones to pass by quickly enough to get to the anthemic chorus. There’s then a messy side-stepping of taking sides – The Vegabonds are all for youthful rebellion and the times being a-changin’ and all that, but they sit on the fence with their finger pointing. “Every side’s got a story and a point of view / they can’t wait to talk about it on the ten o’clock news” is not too far from the infamous “good people on both sides” which rather undermines the fist-in-the-air declaration that “there’s a changing of the guard and it’s plain to see / that the revolution’s going to start with you and me.” Yeah – you say you want a revolution, but what exactly is your revolution, man?

Which is not to say that ‘V‘ is a bad album, far from it – ‘Everything I Need‘ is a fine rocking love song, which snatches at mystical desert trampings revealing great truths – that the girl you have is the most important thing in your life, but that vision clarity can also lead one to a troubling political revelation “I bought a gun on election day / load it up keep the devil away” – hell, we don’t like Trump, but political assassinations are not the answer. Forehand really blisters on this track, whilst drummer Bryan Harris beats away like he’s hammering steel. ‘Travelling Man‘ extols the life on the road, and shows off Beau Cooper’s keyboard skills. Closer ‘Help is on the Way‘ is a standout track, which also finally nails down the band to a commitment “he lost his job in 2008 / the market crash they blamed it on the banks / he said god save the middle class / god save the poor / these one percenters they only want more“. The band, and let’s mention bass player Paul Breuns here who forms half of a great rhythm section, play to their undoubted strengths and it sounds great – just like most of the album does. You could really want to love this album, it’s just – lyrics really do matter – and in too many places these could have done with some more work.

The Vegabonds play and sing great Southern Rock, but should abandon vagueness of intent