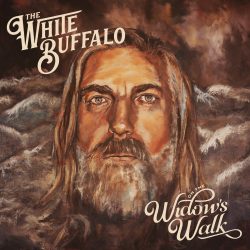 It’s good to have him back! Jake Smith, aka The White Buffalo, returns with this, his sixth studio album and the follow up to 2017’s ‘Darkest Darks, Lightest Lights’. It’s also the debut worldwide album release on Snakefarm Records, a young label within the Universal Music Group, with a focus on roots, country rock, blues & Americana. This album is a great way to introduce the label to the wider world.

‘On The Widow’s Walk’ is exactly the sort of record we’ve come to expect from The White Buffalo – big, narrative driven songs delivered with that strong, slightly gruff voice and a solid but not cluttered musicality that lets you hear individual instruments while appreciating the whole backing track.

This is a good album but that’s also something we’ve come to expect from this artist so what’s new about Jake Smith’s latest release? Well, it feels just that little more solid and assured than previous albums. It’s hard to identify exactly but there’s a renewed confidence about this record that gives it a little more swagger than previous outings. Whether this is down to changes in the way that Smith works or whether it’s the influence of Shooter Jennings, who has produced this album with a particularly deft touch, is impossible to tell but there’s something about this combination of artist and producer that clearly works well. Jennings is building quite a strong reputation as a producer and he’s certainly done a fine job on this album, keeping Smith’s distinctive voice to the fore while keeping the instrumentation well defined. He also contributes some very good keyboard work, most notably with his piano parts on slower songs like ‘The Drifter’, ‘Sycamore’ and title track ‘Widows Walk’.

Apart from Smith’s own guitar work the other musicians on the album are drummer Matt Lynott and bassist Christopher Hoffee, who also contributed additional guitar parts and the whole band gels together well. The album has a really nice balance between slower tracks and some out and out rockers, like opener ‘Problem Solution’ and the quite punky ‘Faster Than Fire’ and it illustrates what a fine instrument Smith’s voice is – a gravelly baritone that really drives the rockers but has depth and warmth for the ballads and slower tracks.

Originally this recording was, apparently, planned as a concept album and the title, ‘On the Widow’s Walk’, refers to the balconies, found on buildings in American seaport towns, where wives would pace up and down waiting for news of their husbands’ safe return from sea. Not wanting to exclude tracks that didn’t fit the initial narrative Smith decided to move away from the original concept of oceans, loss and longing to make an album that’s more about a wider range of emotional responses to everything from the march of technology in ‘Cursive’ through to the complete collapse of a moral compass in the darkly dissonant ‘The Rapture’, the most intense track on the album and an adventurous choice for lead single from this recording – “I stifle all my urges/but the poison only grows/the hunger boils inside of me/’til the evil overflows”.

“Adventurous” is a word that really sums up this album, from the grand scale of the songs to the powerful production and, through it all, that voice that is so relentless in its pursuit of a song’s emotion.

If you haven’t listened to The White Buffalo before you really need to hear what is one of the increasingly outstanding artists in the world of Americana. This could be the album that finally reaches the wider audience Jake Smith so richly deserves.