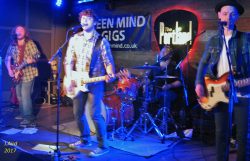 Well – after three studio albums, a live album, EPs, singles and many gigs – that’s it for the Whybirds. Having an announced an indefinite hiatus the Americana band are currently undertaking their last few live gigs – in fact there’s just the Lexington in London on August 11th still to go. There was never any expectation that The Whybirds would bow out quietly, and sure enough they were playing at outdoor festival level in this small pub music venue. The three piece of Dave Banks (guitar), Ben Haswell (guitar), and Luke Tuchscherer (drums) were expanded up to a four piece with the addition on bass of Nick Mailing, who also produced the band’s first and third albums. This arrangement allowed for the return of some guitar duelling, whilst Luke Tuchscherer did his best to beat his drum-kit into submission. Ear ringingly loud, and hard rocking, the only issue being the difficulty, sometimes, of picking out the vocals as they rotated around the band members. Words matter, of course, but the drive of a hard rocking band matters as well.

An early highlight was Turn Right (I’ll turn left) – the ultimate separation song: “that’s the end / for you and me my friend / junction up ahead / turn right I’ll turn left”. That’s something The Whybirds do really well – sum up experiences: The band counts four does this for the feeling of playing in a band, both the emotions of making music and also of being in a tight knit group of musical comrades. It’s a quieter number in the set, but things don’t stay low key for too long. The Whybirds also included some covers, for the purpose of clearly laying out their musical influences. She Said, She Said sparkled with psychedelic fervour whilst Neil Young’s Fuckin’ Up was a raucous guitar work out worthy of Crazy Horse, with Dave Banks making his guitar scream whilst Ben Haswell added a very Shakey solo of his own. Stretched out as far as it would go – and then some – it was a thrilling part of the set. The group’s own composition – Four Litle Letters – also expands into an epic stretch of riffing and explosive guitar from Dave Banks – it’s something to see, it’s even more to hear.

There’s a small yell for Girl is on fire – the first song off the Whybirds eponymous debut album. It’s a little piece of rock – almost country rock – perfection, a strong melodic guitar line, the “she’s the unattainable girl” lyrics and harmonising vocals that soar off into the chorus. Before I go crazy is another perfect song, the “you can’t fire me I quit!” kiss-off to a thousand dead-end and deadly boring jobs: “I got to leave before I go crazy / I got to leave before they make me / man I got to get out / I’ve got to leave this job I hate / ‘cos every single morning I’ve been coming in late”. There’s a touch of poignancy though when the road to freedom is viewed from the back of a bands tour bus. There’s also a touch of Steve Earle around it – but the final closer is all Springsteen – Rosalita is another song celebrating both blue collar passions and the dream of glory roads reached through taking a band out into the world. It’s a more than fitting conclusion to the Whybirds last Cambridge gig. For now.