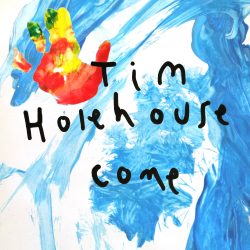 Tim Holehouse hails from Portsmouth, and boasts a musical journey reflecting a busy touring schedule and a variety of genres, from rock to the more acoustic guitar-led sound of this, his latest album, on which he creates a distinctive sound from diverse sources, including roots in the blues. Musically a number of influences stand out, notably Bill Callahan in his Smog days, both in his vocal style and tone, and arrangements, which focus on acoustic guitar and percussion, with prominent use of strings, augmented by keys, and electric and slide guitars.

On some tracks this summons up the spirit of Nick Drake in his ‘Bryter Layter’ era, but elsewhere the vibe veers towards the early years of the Velvet Underground, notably on the ominous and unsettling ‘Prince of the Palace‘, while on the mid-tempo ‘Aveiro‘ a more relaxed feel still has echoes of Lou Reeds’ flat vocal delivery.

On ‘24 Hours (Come)‘ there are echoes of Talking Heads in the repeated refrain “Come and sing with me today” while ‘(‘I’m Not) Icarus‘ features arpeggiated acoustic guitar reminiscent of Love’s classic album ‘Forever Changes‘.

Writing is strong throughout – ‘Numbers Game‘ revisits a classic song theme of the passing eras of life, apropos of Joni Mitchells ‘Circle Game‘, while the atmospheric and brooding ‘London‘ suggests that the world is a dangerous place, to be negotiated with caution and not a little fearfulness -“Dirty old streets build you up just to put you down“.

The production succeeds in maintaining a coherent feel throughout, creating a memorable album.