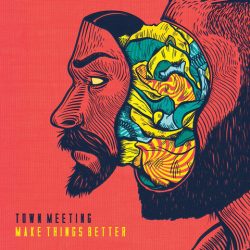 ‘Make Things Better’ is the third full-length album from the Boston based band and what a superb album it is full of fresh sounding, sublime harmonies and superb playing from a band that would be just at home in the back room of a bar or at an outdoor festival, although at the moment they’re a bar band without a bar and a festival band without a festival.

The reason the harmonies are so good is that the three-fifths of the band is made up of the Condon brothers: Luke (vocals and guitar), Russ (vocals and drums) and Brendan “Babe” (vocals, harmonica and percussion) and they have the inbred harmonies that seem to come instinctively and effortlessly to siblings. They’re joined by Tim Cackett (mandolin, lead guitar and vocals) and Derek Fimbel (bass, banjo and vocals) and what a tight quintet they are. One of the highlights of the album is the harmonica playing of “Babe” (could he be the youngest Condon?). On tracks such as ‘Forget My Nots’ and ‘Answers’ his harp wails whilst on others such as ‘Eulogy’ it’s much more subtle and adds another texture to the layers both vocal and instrumental that permeate the whole album.

There are just ten songs and one of them ‘Pretend Isn’t Strange’ is a short instrumental that sounds like it’s an intro to a song not yet written. If there’s a vinyl version of the album, it should open side two as that would be the perfect place for it. The songs vary in tone from the stomping upbeat opening track ‘Bleeding Heart’ which gets the album off to an energetic start to the more gentle, elegiac, solo-voiced ‘Sometimes The Moon’ which features some delightful mandolin from Cackett. This contrasts with the wailing harmonica and dense, rocky guitars and the call and response, almost gospel holler vocals on ‘Forget Me Nots’. There’s a range of styles and genres running across the album but underlying it, is a distinctive ‘Town Meeting’ sound that’s all their own.

Apart from the varied instrumentation, the other element that pulls you into the album are the sometimes obtuse and opaque but often very poetic lyrics which are full of dark imagery. For example in ‘The Fourth Verse’ there’s “When will we learn that Sunday night is the end of the week-end and there’s more to be said with your feet on the edge when you can’t see the deep-end”  and from ‘Silence Speak, “You told me a story with your legs and I wrote it down in my soul” amongst other examples.

Winners of the 2017 New England Music Awards “Roots Act Of The Year”, Town Meeting have been compared to various bands such as The Band, Crosby Stills & Nash, Wilco, Drive-By Truckers and even Moby Grape amongst others and there’s probably a touch of all of those bands and more in their sound – what band doesn’t carry its influences into their music. But Town Meeting are not copyists and they have their own unique sound which makes them a joy to listen to. Live they’ve opened for the likes of Bob Dylan, Willie Nelson. Jason Isbell and Brandi Carlile and judging by this album, they would have been able to stand their ground with all those giants.

Town Meeting have made a superb third album in ‘Make Things Better’ that deserves to be heard. There’s not a bad track on it and their energy and the love for what they do shines through every note they play and every word they sing.