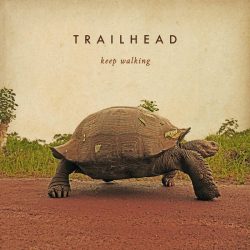 Never go walking with The Proclaimers – it’s really tiring! But if you do fancy trekking 500 miles or so, according to Lonely Planet, the sure-fire way to avoid blisters whilst walking the Camino de Santiago is to wear a pair of women’s stockings under your socks. I’m not sure if Berlin-based musician Tobias Panwitz followed their advice when he trudged along the Camino, but one thing he did do, was compose an album of songs using the rhythm of his 500 mile walk as the basis for a basic backing track, and wrote down the lyrics that flooded his noggin mid-hike, before he got back to Germany, and went into the studio with his band. Recording under the name Trailhead, ‘Keep Walking’ is his third album under this name.

A favourite of ours over at AUK Towers, an exhausted Panwitz obtained his Compostela  – the Certificate of Completion, which is issued at the big finish at Santiago Cathedral, when the walker presents their pilgrimage passport – the Credencial – which is stamped at overnight stops (refugios) along the way. Trailhead also deserves a medal for surviving constant drenchings (Galicia is the wettest region in Spain), the pong and pain of pilgrim’s foot – when forty walkers take off their socks (and stockings?) at the same time in the curfew-bound refugios, a gas mask would come in handy; especially for the unavoidable ronk of snore-breath that emits from fellow walkers, happily deep in slumber, whilst you gag and stare miserably at the ceiling, tallying the day’s footsteps on your Fitbit and trying to count sheep.

From the jaunty exhortation of the opener ‘Take a Walk’, which puts a spring in one’s step – “When you need some contemplation, take a walk, take a walk/ when your soul needs a vacation, take a walk, take a walk/ do it now,” toPanwitz’s arrival at the finish line in ‘City of Saints’, the listener is there on the trek with him every step of The Way: enjoying the scenery and the endless parade of peregrinos who have their own reasons for taking on this increasingly popular endeavour and who forge a real sense of community, as is common amongst those who share a similar passion:

“You meet all kinds of folks, from Holland and Australia/ from all over I suppose and all of us where somehow turning to this track, that keeps pulling us forward/ no-one would look back.” But it’s not always easy, reminds an aching Panwitz, from his bunk bed: “the days were burning hot or coming down with rain/ in the evening I need something to take away the pain.” Pass the Rioja, Kamerad.

On ‘Walking the Camino’ which triggers memories of the glorious, Balearic classic ‘Driving Away From Home (Wicked Weather For Walking)’ by It’s Immaterial, with its propelling and infectious rhythm, Panwitz brings his writer’s eye to a conversation with a young woman who “was doing 46 KM today,” Panwitz asked her “What was she running away from?” and advises her to take a rest, before he explains his religion – living in the moment and enjoying the transient beauty of nature.

And nature does indeed abound on this scenic promenade. People like Trailhead have been enjoying (?) the journey from St Jean Pied de Port to Santiago de Compostela and the relics of St. James, in the hope of obtaining a plenary indulgence – absolving all their sins and getting a fast track to heaven -since 970 AD. (The first written account.) The Papal Decree of 1968 which declared that this would no longer be the case has done nothing to impede the escalating flock of masochistic, perambulating pilgrims. But to avoid the pain, some cycle the route, others go by horseback.

I don’t know if Trailhead perused that tome before he set off, but if  you’ve read I’m Off Then: Losing and Finding Myself on the Camino de Santiago by Hape Kerkeling, then you’ll know exactly why Tobias sings on the bluesy and rousing ‘Too Many People (On The Camino)’: “Everyone who came here after reading that book by the German Comedian raise your hand…everyone’s on The Way, but no-one understands,” lamenting his countrymen who go on the walk, but also put down Spain whilst they do.

It might not just be Kerkeling or Moore’s books that were the inspiration; many walkers discovered the joys of walking the Camino after watching Martin Sheen and his son Emilio Estevez in the film, The Way; and let’s not forget those who will be setting out this summer after watching Kate Bottley, Heather Small, Debbie McGee and Neil Morrisey, who courageously followed the ancient trail in the recent BBC documentary Pilgrimage: The Road to Santiago. Although they did not walk the entire length, they did do the last 100 KM, which in itself is a challenge. Pilgrim’s foot and inner thigh chafing are just two of the many ailments that can engulf a walker. To avoid the chafing one veterano suggested wearing a kilt!

Faith might move mountains, but Panwitz and Bottley first had to walk up and over them. Panwitz made like Johnny Cash and walked ‘The Line’ following the middle of the road religiously with his fellow pilgrims. He says that “Walking is meditative monotony for me.” Before he walked the Camino, Panwitz spent time working as part of the trail maintenance crew in Northern California’s Redwood Park. Tobias adores trekking and feels a divine connection to nature. It would probably be a fair statement to call him a tree hugger.

Americana is this wonderful musician’s first love though, having listened as he grew up, to the Grateful Dead, Jackson Browne and Jesse Winchester amongst many glorious others. Panwitz’s wonderful Brexit-busting band, who are as tight as a very tight thing, feature Polish singer Renata Morning, drummer Dirk Morning, and fellow Pole Michal Golabek on guitar, with British bassist Paul B Keeves, along with Guido Kreitzmuller from Berlin and Kiwi Matthew James White, who both sing and have written with Panwitz, who were all kept in harmony by producer Robbie Moore, who is also a Brit. Talk about pan-European. Their love of all things Americana keeps these amigos close.

‘Keep Walking’ is an album worth sticking in your rucksack next time you go for a hike. Kate Bottley’s going to love it! Buen Camino!

Trailhead's lovely third album will get you off your ischial tuberosities and see you along The Way!