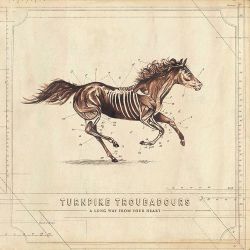 It is an immutable law of album reviewing that at the end of every year when things are winding down and there’s very little new around an album pops up that is, quite simply, immense. It’s not a question of there not being much competition either, these records are giants and future classics and this year’s entry is the fifth outing from Oklahoma’s Turnpike Troubadours.  There simply hasn’t been any set of songs released that are any better than the eleven on offer here and the six members play them brilliantly.  It’s an object lesson in how to make new, vibrant, exciting and relevant music in a genre (country) that frequently looks as if it’s running out of steam and consisting of little more than retreads and formulaic dross.

The Housefire opens proceedings and what a way to do it.  It chronicles the total destruction of the narrator’s house, him, his partner and child barely escaping with their lives, losing everything but finding hope and recognition that what’s important is love and people. As leader Evan Felker sings “Well I know I’ve been blessed/I can make more out of less/I can get my rest in any bed that I lay down in”.  All of this is set to a glorious tune and allied to a great singalong refrain, strange as that may seem.  This template is followed throughout with perhaps the standout being Pay No Rent, a heartfelt tribute to Felker’s aunt Lou who died last year.  It’s a song you can sing, nay roar, along to while tears stream down your face.  Elsewhere the band rock out on A Tornado Warning and The Hard Way and deliver a classic boom-chicka-boom Johnny Cash sound on Pipe Bomb Dream while the timeless country rock sound of Something To Hold On To soundtracks a lover’s desperate plea to an ex who ‘comes smiling through the doorway looking like an old regret’.  A truly great album.

Outstanding and pretty much flawless set from Oklahoma men