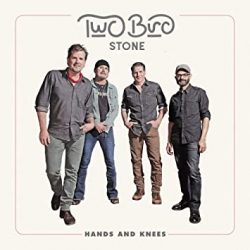 ‘Hands And Knees’ is the debut album from Two Bird Stone which is a new band made up of some of Nashville and New York’s finest session musicians. The driving force behind the band is Liam Thomas Bailey who plays fiddle and banjo and is the lead vocalist as well as writing the songs. He’s aided and abetted by Bailey’s long-time musical partner (they spent 11 years together in Rodney Atkins’ touring band) Judd Fuller (bass, mandolin and vocals), Chad Kelly (accordion) and Rohin Khemani (drums).

The band’s music is a mixture of pure string-driven Americana, folk, bar-band rock, bluegrass and traditional Celtic jigs and reels and a heady mix it is. An adopted North Carolinian, Bailey has a superb, soulful voice that’s as smooth as a locally mixed mimosa cocktail that’s been warmed slowly over hickory chips. Whether singing plaintive love songs such as the superbly titled ‘When Somebody Can See Your Soul’ or whooping it up on songs such as the Irish jig based ‘Needle And Thread,  his vocals never fail to impress. Also impressive is his banjo playing – this is an album where the banjo takes the place of a lead guitar and drives the more up-tempo songs along at quite a lick. His fiddle playing is also exemplary – you can see why Bailey’s a leading session musician. Kelly’s accordion mixes impressively with Bailey’s fiddle and banjo and the result is a rich sound that is filled out to perfection by Fuller’s mandolin and bass and Khemani’s laid back drums which never intrude.

The songs themselves are all excellent and whilst at times some of the lyrics are on the melancholy side – it sounds as if Bailey’s love life hasn’t always gone to plan and he’s been having a hard time of it. However, the last track on the album ‘Drive It To The Wheels Fall Off’ is dedicated to his wife of ten years so maybe the songs aren’t all autobiographical! And talking of that song, it’s a duet with fellow North Carolinian, Sarah Siskind whose superlative voice adds another layer to this many-layered and nuanced album. There are also guest appearances from Kenny Vaughan on guitar and Jeffrey Clemens aka The Houseman on drums.

‘Hands And Knees’ is a total delight from start to finish and all ten tracks have strong melodies and excellent lyrics. The production from Bailey and Dan Rowe is spot on and the mix is crystal clear with every instrument given space to breath where needed so each one can be heard perfectly.

Like all bands currently, it’s a shame that they can’t take this splendid album on the road and get audiences on their feet and dancing to the jigs and reels and brushing away a tear as they listen to the love songs. In the meantime, the music of ‘Hands And Knees’ deserves to be heard by as many people as possible – it could turn out to be one of the sleeper albums of this strange and traumatic year.