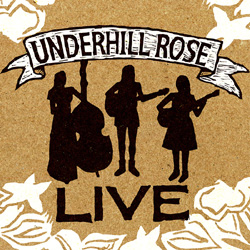 Their last album, The Great Tomorrow, was a fine slice of country rock with pedal steel, guitar, Dobro, fiddle and drums giving it a very polished feel. Here one has the opportunity to hear some of those songs in the raw and generally the live versions are preferable. The band’s playing and their vocal harmonies are more exposed but rise to the challenge, no more so than on When I Die which has more gravitas than the studio version. Having said that the trio are no hillbillies and there’s little sense of dirt under their fingernails as they offer up several of their own songs along with a series of covers, a couple of which one senses are in the main selected due to their being crowd-pleasers on the night. Therefore we get versions of These Boots Are Made For Walkin’ and Bette Davis Eyes (with the intro including a remark from Molly Rose’s gran), the latter actually very fine but did we really need Ms. Sinatra’s opus again on disc? The vintage Trouble In Mind gets a fine Spiritual uplift with the harmonies well to the fore but it’s their cover of John Prine’s Long Monday which gets top marks here with Underhill’s lonesome harmonica adding to the melancholy mood.

As for their own songs, the opening Who brought The Sun along with 2000 Miles are fine examples of the trio’s basic sound with guitar, banjo and bass rippling along under the excellent vocals while They Got My Back is probably the most country number here. Westside approaches the Prine song in terms of atmosphere although there is a frisson of danger on the moody Whispering Pines Motel. They’re at their best on Love Looks Good On You which has some great lyrics and a fine hook and is ripe for plucking by any astute singer looking for a down home country hit.