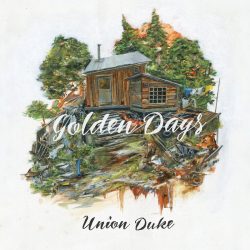 Union Duke are self-styled “folk quintet” from Toronto made up of Ethan Smith, Jim McDonald, Matt Warry-Smith, Will Staunton and Rob McLaren, five long-time friends who have in their third album ‘Golden Days’, made a very friendly album. It’s radio friendly, headphone-friendly, stereo system friendly and when they tour or play festivals, live friendly too.

Made up of thirteen tracks of which nearly all are love songs, this is the kind of album that will bear repeated listening – especially if you like the sound of the banjo as most of the tracks feature the instrument heavily. There’s also acoustic and electric guitars, fiddles, drums and harmonicas. And whilst the band have various lead vocalists, their harmonies are superb. At times they could be mistaken for siblings when they sing in three, four and sometimes five-part harmonies but in this case, it’s the years of friendship that allows them to blend their voices to where the whole is bigger (and better) than the sum of its parts.

There’s some old-timey sounding country such as ‘Torn In Two’ which is a love song about country music which includes the line “It’s only country music and you won’t like it anyway”. There are ballads like ‘Right For Me’ and even the jaunty bluegrass ‘Coffee/Whisky‘ that wouldn’t have sounded out of place on the soundtrack of “O Brother Where Art Thou”. There’s even a bit of country yodelling on ‘Baby Don’t Break’ which will make you smile.  The stand-out track is ‘Golden Days (I’ve Been Down)’ which encompasses all that is good about Union Duke – sweet harmonies, jangling banjo and a soulful lead vocal.

‘Golden Days’ was recorded live off the floor and sounds it. It was mixed by Grammy award winning mix-meister Mark Lawson (Arcade Fire, Basia Bulet etc.) and he’s allowed the tracks to breath – everything is as clear as a bell. As the band say on their website: “Golden Days will take you back to your warmest memories: nights by the lake, passing a bottle around the fire or singing with your friends at the top of your lungs”

‘Golden Days’ is warm, bucolic and friendly – in fact the perfect summer soundtrack – so let’s hope we get one in the UK this year!