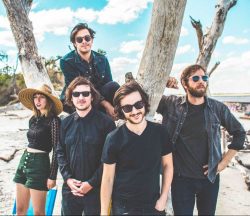 East Carolina’s SUSTO have been making giant strides these last couple of years, generating huge acclaim for their live shows and acquiring a number of big-time fans including Band Of Horses’ Ben Bridwell. “I got an e-mail from him, telling me he loved the record and wanted to meet with me and Johnny. That was actually the day I wrote my professor and said, ‘I’m not coming in,’” recalls lead singer and songwriter, Justin Osborne.  Americana-UK fires the questions as he packs the cases and gets those all-important tunes ready for the trip, their ever first UK dates on the back of & I’m Fine Today, their new album.

Given the amount of shows you have done last few years, you must be an old hand at this touring lark by now?
We’ve spent the majority of our time on tour these last few years, so we’ve all grown pretty accustomed to life on the road. We travel with our own van and trailer in North America, so we are quite used to life in our van, the “sock Drawer” as we call it.

Since we will be coming over to Europe for the first time as a full band, it’ll be interesting to see how we adjust to a new vehicle and lots of new cities to be played in, but we are really excited for it! One of the most difficult things about touring so much is finding decent food to eat. Once you kind of develop a system of knowing what types of places to look for it makes it more fun. Last tour we were on a mission to visit as many Ramen Houses as we could so we were eating loads of noodles by the end of it!  We’ll see what we get into for this tour.  It’s always hard to tell until you’re here. Suggestions are appreciated! So if anyone reading this makes it out to a show, please give us some advice. We’re looking forward to meeting everyone and to bring our energy to some new (to us) stages!! Happy to be sharing the full susto experience in the UK & Europe.

You’re stuck on the M6, bumper to bumper, you’ve run out of pies – yes, someone ALWAYS recommends pies if you ask them! – and the only thing that will ease the boredom is a tune or two. What’s it to be??
Well, ten albums I can’t go without are (in no particular order)

These are all albums that I’ve been wearing out when driving on the road this last year (except for Shame which is a new obsession). Sometimes we’ll have days with ten+ hours driving and the only way to handle that kind of time in a vehicle or behind the wheel is a great soundtrack. These albums have been that for me and us. Constant Stranger, in particular, is one that the whole band listens to together. It’s like our theme album, our hymnal for the road.

Tyler is getting some real traction at the minute.. What do you like about him and his record??
I really relate to his record. I don’t know him really. We met once outside a portable toilet at a festival but that was it. His storytelling just reminds me a lot of myself. I’ve been touring since my early 20’s (30 now) and have been doing all the partying, chasing ladies, but have also found a lot of real beauty and experience from it. When I listen to Purgatory I hear a kindred spirit, someone I hope to get to know a little better someday in the future. Also, I think he finally found a lady to settle with, judging from the music and his Instagram. I found that too, and it’s nice to hear the sentimental side come out.

Tell me about your Shame addiction? I saw them at Glastonbury last year and they totally blew me away!
I think I first heard of them just a few weeks ago In an article or something from NPR. Anyway, I was immediately obsessed with their story and their sound. I’ve even got a Shame shirt that I’m wearing all the time now! Have had songs of Praise blaring all weekend since it came out on Friday.  Really hope I can catch them live sometime

I love that youthful aggression and cockiness. They remind me a little of a young Gang Of Four.  Ok, so War on Drugs. I’m a fan but more of him than the records I think. I love the sound, the texture that he creates around himself. He really has an aura I think.
Yeah, I agree with that too, but there are certain moments on his records that just absolutely kickass, mostly instrumental moments. Just feel so damn epic!

Exactly. The kick in on Under The pressure for example. Kills me every time!
I ‘live’ for them sort of moments in records. It’s very rare but War On Drugs seem to have loads of them. Sometimes it’s all I need.
Agreed, and there are even more of those moments on his most recent album. Also, like you said, the texture is really magical.

Ok, finally, tell me a bit about Kaleo. I don’t know them.
I first heard them on tour in 2017. We did an arena tour With Kaleo & Lumineers. I didn’t really get into their album until after the tour, but it’s a really solid rock album!  They are from Iceland and have been playing together since they were kids but this is their first album as Kaleo.

& I’m Fine Today is out now on Rootsy Nu.