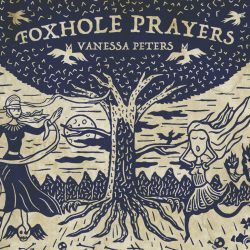 This is an infectious record and one of those which has many “ear worm” moments but all in a good way. Vanessa Peters is a Dallas based singer-songwriter and this her eleventh album is a triumph which has its inspiration in the turbulent times that we live in. That it can be a critique on many of the things that are troubling in the world yet still retain a sense of positivity and inspiration is a credit to the artist who has written all bar one of the ten tracks on this album herself. The publicity that comes with the record refers to Peters’ passion for literacy and her view that the current times are much like the years depictited in “The Great Gatsby” by Scott-Fitzgerald. There is certainly a cutting edge to the lyrics with Carnival Barker making the point that whilst voices of reason are out there they get drowned out by the man with the money and the big machine. It won’t take much imagination to work out who and what world event she is alluding to there.
Essentially this is an album about waking up to the issues around us and being determined to do something about it which is demonstrated clearly in Fight a terrific track where the protagonist says don’t be a victim do something, go out there and fight. The title track has an equally deep meaning referring to the sky falling in around us but delivered with a cracking tune and Trolls implores us all to be on the right side of the battle lines which are referred to as being clearly drawn, a clear metaphor to the current political issues in many parts of the world. The CD artwork has cartoon style drawings which depict the sense of concern that the album urges although it has to be stressed again that this is by no means a dark piece of work. Indeed there is levity in Lucky, a lively pop tune with a great guitar solo and whilst the album closer, What You Can’t Outrun is a warning that you are the sum of your own limitations and the things around you it is a great track and a fitting conclusion to a really rounded and socially conscious piece of work.