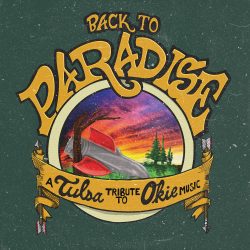 The migration of people of Oklahoma, ‘the Okies’, to California from the mid-’30s to the mid-’50s, stirred by the Dust Bowl era, is a huge part of American history captured in the award-winning Steinbeck novel ‘The Grapes of Wrath’ as well as the Woodie Guthrie song ‘The Ballad of Tom Joad‘.
Due for release on 11th September, ‘Back to Paradise A Tulsa Tribute To Okie Music’ is the result of a group of musicians from Tulsa, Oklahoma, travelling to the iconic Paradise Studio at Grand Lake to record this, the first album recorded there since 1978 thanks to the restoration work of Tulsan, Rick Huskey. It honours numerous Oklahoma musicians from over the years including influential artists such as Leon Russell and JJ Cale.

With a total of 20 Tulsa musicians contributing to this album and Okie music encompassing a wide-ranging mix of country music, this album has something for everyone with an interest in all things Okie.

Mostly recorded live, the album opens with the groovy sound of Paul Benjamin and his cover of the JJ Cale song ‘I’ll Make Love to You Anytime’ showcasing some tremendous musicianship from the participants. Next up is the rockier sound of young & prominent John Fullbright with ‘Crossing Over‘ (Steve Ripley). Again, the accompaniment is wonderfully atmospheric.

Benjamin & Fullbright between them take the lion’s share of the leads on this album, along with the inimitable vocal of Jesse Aycock who graces three of the songs. Aycock bringing his own Okie style to the likes of ‘Rock n Roll Gypsies‘ (Gypsy Trips) and ‘Tulsa County‘ (Jesse Ed Davis).

The fact there was a core group of musicians playing throughout the four days this was all recorded gives a consistency to the high quality of the sound and musicianship. For the most part, the vocal performances are fresh and alluring with the seventeen songs selected to make up this tribute album range from the acclaimed to the enigmatic.

All things considered, a very generous offering of some fine work