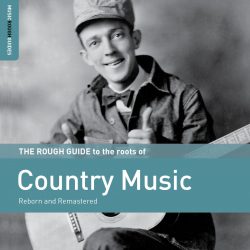 The tracks on this compilation, all initially recorded in the ’20s and ’30s, and lovingly remastered using pioneering restoration techniques, showcase the traditional storytelling of the era in its purest form. The combination of the banjo, fiddle and guitar bring to life many a tale of woe and wonder with quite a roller coaster of emotions – provided not least by some very early, and epic, auditioning of the slide guitar.

Several of country music’s trailblazing artists feature in this eclectic mix. Jimmy Rodgers and The Carter Family, to name but two, becoming some of the most influential in the history of country music.

Reborn and remastered, this raw collection will have you foot-tapping and boogieing, before luring you to rest on the porch to some sublime instrumentals. ‘Cumberland Blues‘ by the Fiddlin’ Dec Roberts Trio being a stand-out instrumental to relaxing your weary feet to. That is after Uncle Dave Macon & Sam McGee have had you twirling ‘Way Down the Old  Plank Road‘.

Pioneering on several fronts, this is an immense album for the purists as much as it is a rough guide, or introduction, to a less au-fait audience. Its unique insight, differing styles and leading performers of early country music make it a hugely desirable anthology.

A unique insight into country music's raw and intriguing roots