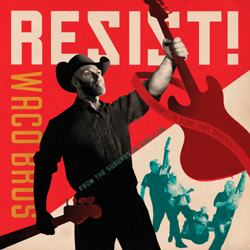 Cash meets Clash! The Waco Brothers, a mash up of Jon Langford’s punk sensibilities and cowpunk twang, are probably the only band still around who merit the term “Insurgent Country,” a trademark on which Bloodshot Records built their reputation. ‘Resist!’ is an excellent compilation drawn from their  20 plus years with the label with many of the songs being released on vinyl for the first time. The collection focuses on their songs about resistance and protest and one presumes it was compiled as a response to current US politics but, closing as it does with ‘Bad Times are Coming ‘Round Again’, it’s weirdly prescient.

The back cover of the album asks listeners to raise a glass to Joe Strummer and his ghost stalks several of the songs here. There is a fine delivery of ‘I Fought The Law’ while Langford sounds so much like Strummer on the punk infused rockabilly of ‘Plenty Tough, Union Made’ and on ‘See Willy Fly By’. If this were all then one might regard The Wacos as simply Langford’s tribute band but there’s also a host of exciting country whacked songs here just begging to be let out of their traps.

‘No Heart’ romps along like the cowpunk of Jason & The Scorchers and the opening song, ‘Blink Of An Eye’, charges into view like the Seventh Cavalry taking pot shots at the president, its country thrash heightened by frenzied pedal steel. ‘Lincoln Town Car’ comes across as if Billy Bragg was fronting The Long Ryders while ‘Never Real’, a lovely country waltz which relates the march of gentrification destroying neighbourhoods, is reminiscent of the folk songs of the dustbowl. They throw in a magnificent cover of Neil Young’s ‘Revolution Blues’ which thrashes around like vintage Giant Sand in full bore desert rock mode before ending with their 1995 song, ‘Bad Times are Coming ‘Round Again’. Sadly, this Guthrie like anthem remains pertinent.