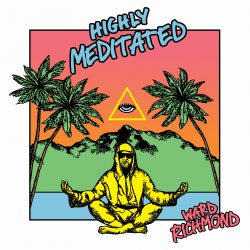 When an artist’s past bands were called The Boys Named Sue and Party Police, there is a suspicion that they may not take life too seriously. Ward Richmond is a veteran of the Dallas scene and like many people who have had a life outside music it’s all about the words. The album was born out of some fairly traumatic life events, mostly involving very sick children. “Turning all of this emotional energy into new songs happened very naturally,” he says. “Every Saturday, I would wake up at 5am with my 1-year-old son, Levi, grab my guitar, sit down for a couple of hours, and just write – and force him to listen.”

Opener ‘Everything’ is a story of quitting; smoking, drinking and drugs. ‘In Europe’ is about a wild trip to Europe that sounds autobiographical, and apologetic. Some of the music is bit rough around the edges, which is no bad thing and the harder rocking songs have more than a touch of bands like Weezer about them. As the subject matter shifts to family, Zen-Yoga, and his personal spiritual journey the music becomes calmer. ‘Shootin’ for the Stars’ is a gentle acoustic song about failure and recovery. The best songs on the album are ‘Live Oak’ – “I’ve been searching for something for so long, I got bored”, and the single ‘Smile’ – “I tried to get my shit together- it turned out that’s tougher than leather” and then we are back to contemplating his life in ‘These Days (The Nights Don’t Last So Long)’ a honky-tonk meditation on the passing of the years. It might almost be a concept album.

Most of Richmond’s words are about a life that most of us of a certain age can recognise. He says that “The songs wrote themselves. Levi had no choice but to endure these songwriting sessions. Now that he is 2, he can clearly communicate to me that he does not like my music.” Richmond needn’t worry, by the time he is seven Levi will be dancing around the room to them, although skipping the four with explicit content warnings might be advisable to avoid a note home from school.