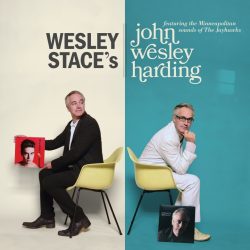 A dream combination – Stace backed by the Jayhawks. Novelist and compere par excellence, the former John Wesley Harding releases his twentieth record. This time around he’s enlisted the help of Minneapolis’s finest. Stace has always been an intelligent, witty lyricist. His voice is polite and restrained in tone; sitting well with gentler, acoustic song arrangements. Opening track I Don’t Wanna Rock ‘n Roll is unfortunately true to intent – it doesn’t quite rock ‘n roll. If anything it’s an easy listening soft rock exercise which doesn’t mesh too well with Stace’s vocal qualities. Better Tell No-One Your Dreams is much the same – by no means a bad song but not quite as good as it should be.

For Me And You has a Big Star vibe from the start, a little more gutsy and satisfying in its riffing. You’re A Song works much better still– a gentle country meets Beatles refrain. Too much of the record seems to sit in a stylistic middle ground; Stace’s voice works so well on soothing songs such as What You Want Belongs To You but doesn’t hit the same heights on tracks like Let’s Evaporate. The Jayhawks sound is smoothed out a little to accommodate Stace, but the end result is less than the sum of both parts. Lyrically, as ever, Stace is poised and pithy. Musically, The Jayhawks aren’t quite the right fit for the man, despite their impeccable pedigree.

Not without its charms though they are all too fleeting