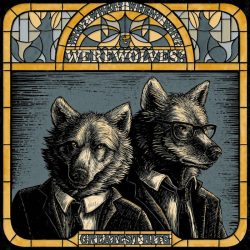 Indie bluegrass from Philadelphia? Complicated moniker? Super ironic album title? Hipster alert senses are tingling with this reviewer. However, let’s not judge a book by its cover. These guys (Andrew Fullerton and Matt Orlando) were formerly the crux of Philly rock scene stalwarts The Tressels, which is a much shorter, manageable band name.
Luckily for us, this punchy seven track album is pretty darn good, and the 6Ws, as is their chosen abbreviation, are very strong lyrically. The songs rattle along at a swift, sometimes furious pace; there’s little room for any ponderous self-reflection in any of the offerings. Opener ‘Bluebird’ isn’t one of the strongest tracks, surprisingly, but ‘John Blonde Sing My Eulogy’ – which follows next –  is overflowing with furious banjo, stomping bass drum and a swooping, anthem-esque melody.

The band provides a sturdy mini-set of songs and the lyrics, although maybe oblique at times, are well-crafted in their recounting of thoughtful mini-stories. Lead track ‘Rattail’ eschews the dubious virtues of the nastiest of hairstyles whilst advising against the mistakes of a misspent past. ‘Wilma’ tells of a railroad traveller looking for a lost love. ‘Stacy’s in the Army’ is a great, pithy, track about a military hero’s penchant for ladies’ underwear, and why we shouldn’t really give a damn. It’s played at breakneck speed and hammers the point home with finger-melting banjo picking.

There’s a lot to like, maybe even love about these 6W guys and their indie-bluegrass. They might never cast their live shows net wider than Pennsylvania, but we can enjoy them from afar regardless.

Look past the hipster howl – the 6Ws bark out some really great indie/bluegrass tunes.