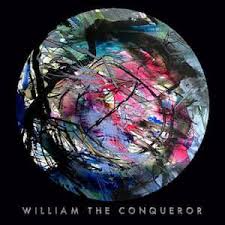 William The Conqueror, a three-piece band from Cornwall, is the creation of former folkie, Ruarri Joseph. For those of us fortunate enough to have caught Mr Joseph in his former guise playing small, intimate venues, often with just an acoustic guitar for company, there was always the feeling that there was another rockier, harder edged version waiting to cut loose.

He took a career changing decision to pass on the chance of a deal with Atlantic Records for fear, in his own words, of having them ‘box me in as something I wasn’t, but I didn’t know what I was either so it made sense to leave and just get out on the road, see if I could figure it out.’

Recorded in Joseph’s garage with single live takes and minimal overdubs Proud Disturber of The Peace is the initial result of that decision. This is a more eclectic collection compared to his solo work with a fuller sound created by the high-class accompaniment of his multi-instrumentalist partners in WTC, Harry Harding and Naomi Holmes.

The opening track, In My Dreams, a fast-paced belter about destiny, disappointment and defiance sets the scene for a trio of opening tracks with borderline grunge guitar hooks. What subsequently follows is, by comparison, a more laid-back sound that allows Joseph to venture into r&b, soul and blues, perhaps highlighted best in The Many Faces of a Good Truth.

There is enough here to keep fans of Joseph’s previous persona happy, none more so than Cold Ontario, Sunny is The Style and Manawatu, beautifully crafted tracks that allows Joseph’s immaculate vocals to shine. Indeed, in a music industry full of clones and monotones it is a joy to behold a musician blessed with such a distinctive and unmistakable voice, no matter what the change in musical direction.

Proud Disturber of The Peace is a triumph and deserves to bring William The Conqueror and Ruarri Joseph some long overdue recognition and a higher profile. With one of the tracks on this album, Tend To The Thorns, nominated for UK song of the year at this year’s UK Americana awards perhaps that suggests sooner rather than later.

Ruarri Joseph crafts a Cornish cracker with his new project