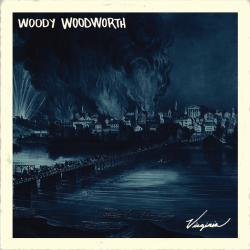 Listening to the new album from Woody Woodworth and his band The Piners from Richmond, Virginia, is a deeply joyous experience and marks the emergence of a singer-songwriter who should prove to be a major and enduring talent on the Americana scene. Regardless of how many Americana tropes are present – acoustic guitar, fiddle, mournful vocals and so forth – there’s something about his music that’s utterly convincing. He has that ache in his voice that imbues his every word with portent and meaning.

Not that they’re really needed because he’s a seriously accomplished writer. All of this is epitomised by the title track. Named after the state where he comes from, it is by turns elegiac, wistful and hugely evocative, a glorious love song to his homeland. Then there’s the stately ‘Nashville By Morning,’ the sad epic ‘The Day That Ronnie Died’ and the self-explanatory sadness of ‘Casualty of Love’. Woodworth can turn it up when he’s minded to as well, with changes of pace being provided by the rocking and urgent ‘Lucky Stars,’ complete with tasty lead guitar work, the fast and furious gospel hoedown that is ‘Peace Like A River’ and the radio-friendly ‘Pretty Girl From Carolina’.

All in all as good a debut as one could possibly hope for.