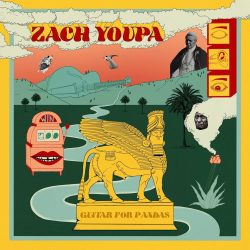 Austin-based Zach Youpa releases his first album, and it’s very much an indie DIY affair.  Self-produced, recorded in a bedroom studio, with Youpa playing all the instruments.  It’s certainly lo-fi and wobbly in places, the drumming staggers here and there, but it’s a charming little record. There’s very much an Evan Dando or Jonathan Richman vibe about Youpa’s songs– super laid back, quirky yet heartfelt guitar/country-pop is his stock in trade. Youpa’s slightly off-key vocal and choppy guitars carry the nine songs along in an engaging way.

Opener ‘Dopamine Dream’ could be classic Richman – a loping lo-fi groove and a super laid back vocal. Reverse echo on the guitar break is a bold move for an opening track. ‘Everybody Wants A Chance’ follows on in a related country-casual way. ‘Dutty Break’ is an odd bit of cod reggae – a short, sharp instrumental that’s gone before you’ve really noticed it or had chance to object to its silliness. ‘Vodka Soda Double Lime’ leans on a Cream Strange Brew-esque vibe. It’s the nearest to ‘rock’ that Youpa offers up, and is probably the weakest track, straying as it does from the album’s overall vibe. ‘Asphalt Slumbers’ is a slice of country-rock-indie; ‘Dead Flowers’ Stones meets Eagles – a heavy sleep following a looong road trip. ‘King Size Bed’ delivers with just voice and acoustic guitar; slowly loping along, wistful and cheeky. Closing, titular track ‘Guitar For Pandas’ is an echo-laden, retro-futurist spacey instrumental. It doesn’t have much to say, but it’s an interesting endpoint nonetheless.

Youpa may never gig further than Central Texas, and his name may get lost amongst a world of Austin Indie/Americana bands. But ‘Guitar for Pandas’ is certainly worth a listen, perhaps even a download.