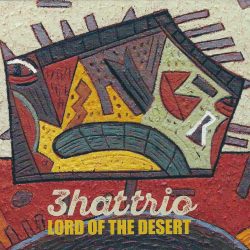 Great music is often connected to the landscape it springs from and, listening to it, your imagination will immediately take you to that land. ‘Lord of the Desert’, from US folk group 3hattrio, immediately transports you to the desert lands of the Zion National Park in Utah, which this eclectic group of musicians, folklorists, artists and poets call home. Deserts can be among the most beautiful locations on the planet; there’s a haunting quality to them that is also apparent in this fascinating collection of songs and tunes on an album that is captivating for the sense of wide open space it conjures up.

3hattrio comprise Hal Cannon who, along with his interest in folklore and poetry, brings his banjo and guitar skills to the band. He’s joined by Greg Istock on bass and the very talented Eli Wrankle on violin. Vocal duties are shared by Cannon and Istock. Between the three of them they produce some outstanding music that is reminiscent of some of Tinariwen’s best work – if Tinariwen were an Americana band instead of a Taureg one! There’s the same sense of languid grooves and hypnotic beats that infuses Tinariwen’s work but, where their desert sounds draw from the Taureg tradition, 3hattrio’s songs clearly carry influences from Native American music along with more recognisable Bluegrass and country/folk elements.

The album’s opening track, ‘Dust Devil’, sets the tone for the record and is a great start. It’s a call and response song, a sort of Desert “field holler”, with exhortations to “settle down your soul”. Starting with a sparse banjo accompaniment the violin kicks in halfway through and you immediately know that Wrankle’s fiddle playing is going to be a big part of this record. He creates wonderful textures throughout, providing much of the eeriness and otherworldly qualities that drift through this music.

Most of the songs on the album follow a similar pattern, though they by no means sound repetitive. Working with just a handful of instruments and little percussion means that the band are able to bring space and clarity to their arrangements and it’s enjoyable to listen to the sense of freedom in the music. Other stand out songs include ‘War’, with its nod to Native American chants, along with more than a hint of Moorish traditions, and the excellent ‘Motel’, a big juggernaut of a song that seems trance-like at times. Along with the songs there are some purely instrumental tracks on the album. Of these ‘Night Sky’ is particularly impressive, giving you that sense of an endless sky twinkling with stars and ‘Skeleton Tree’ is just plain eerie – that violin again, working its magic.

This album won’t be for everyone – but if you like a minimalist approach coupled with a sense of the psychedelic, a feeling for the environment coupled with a wish to express that artistically, then it is definitely for you. ‘Lord of the Desert’ is one of the most aurally interesting releases in a while.

Settle down your soul indeed!

Music that flows from a Desert landscape.