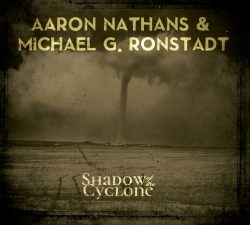 Multi-instrumentalists Aaron Nathans from Philadelphia and Michael G Ronstadt of Cincinnati have combined their talents to produce an album ‘Shadow of the Cyclone’ that deals directly with the challenges of 2020. The title is in itself a metaphor for the situation which has engulfed us and most of the songs deal with life in the pandemic and under the looming cloud of climate change. These themes run through this largely acoustic album built around cello and guitar but featuring many more instruments. In fact, the pair play 33 distinct instruments between them and Ronstadt (the nephew of Linda) holds a master’s degree in cello performance.

The pair’s undoubted musical talents whilst potentially a great asset, do tend to dominate the album, even to the extent that at times you feel it is as much about showing off their prowess as anything else. It is hard not to surmise that the primary function of the album is to showcase the musicians collective talents, rather than to produce a functioning piece of art.

Whereas the roots of folk music are often primitive and the best of modern folk, for this writer, still carries that earthy or primeval element, ‘Shadow of the Cyclone’ is the polar opposite; slick, polished and ultimately sanitised. The songs are frequently over immersed in metaphor with note perfect, flawless vocals serving not so much to clearly enunciate, but often to drain them of any feeling or emotion. An ill-chosen and quite ghastly cover of Sting’s ‘An Englishman in New York’ is the only non-original on the album, all other songs have been written either individually or in collaboration by the pair.

This slick, faultlessly performed and cleverly constructed collection may well find favour with fans of the kind of virtuoso performances often to be witnessed on folk-lite platforms like the ‘Transatlantic Sessions’ but is unlikely to set pulses racing amongst the majority of AUK readers, who I suspect will find it rather anodyne.

Songs reflective of the trials of 2020 suffer from over-sanitisation