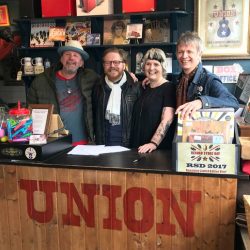 News from the south coast that the much-loved Union Music Store in Lewes is changing hands. After seven years building the specialist Americana, folk and country haven in the heart of the South Downs, owners Stevie and Jamie Freeman have decided to hand over the reins to two new owners that will be familiar to our readers  – Danny Wilson, head-honcho of Danny & The Champs and BWP, and our own interviews editor, Del Day.  Looking to broaden the remit of the shop over the coming months to incorporate key and ‘must have’ titles from all genres, the pair will look to take the shop onto the next phase of its journey beginning June 8th. We wish them the very best of luck!  Stevie and Jamie explained their decision to a packed RSD crowd and issued the following press release.

We opened our doors in November 2010, and since then have hosted hundreds of in-stores, released 12 albums on our label, and promoted a ton of gigs for some of roots music’s most exciting names. We’ve made life-long friends of some incredible musicians, managers, promoters and producers. We’ve helped put Americana firmly on the map in the UK and in our own little corner we’ve been instrumental in creating a vibrant live music scene in Lewes. In short, we’re proud of what we’ve achieved…

But it’s time to move on, so we’ve decided to pass Union Music Store on to someone who can take it on the next part of its journey.

Today we are announcing that as of June 1st 2018 the business will be under new ownership, and those owners couldn’t be more qualified. Del Day and Danny Wilson are at the forefront of the roots music world, and we’re absolutely thrilled that they are taking on the little store we created and love so much. Del is a specialist roots music PR with a decade of record buying experience in his former life as a jazz buyer at HMV. Danny is the lead singer of multiple AMA-UK award-winning band Danny & The Champions Of The World, Bennett Wilson Poole and a fervent record collector. Together they already own a brilliant little record label Maiden Voyage. It really is hard to imagine a stronger pair to take on this challenge.

Del Day: “The opportunity to take on one of the country’s real cool record shops is something that we just cannot refuse. Myself and Danny are first and foremost music obsessives. It’s our lifeblood.” To own a record shop has been a dream for me since as long as I can remember. To be able to take over one as established, loved and respected as Union is fulfilling that dream.”

Danny Wilson: “Guys like me and Del dream of running a record shop, always have, and here we are taking the wheel for the next chapter of Union Music Store. We really couldn’t be more excited. We already have huge plans and look forward to having the shop as the hub for all our projects including our Maiden Voyage label, PR and agency.”

Jamie and Stevie will retain the Union Music record label, which will operate separately but alongside the store. In fact, Stevie and the label will be based in the offices below the shop and we expect to work closely with the new owners on many aspects of the music world as we do now.

Stevie has been working full-time as CEO of the Americana Music Association UK, and that work continues to grow ever more demanding following the last few years’ incredible successful AmericanaFest UK with guests such as Van Morrison and Robert Plant. Jamie is spending more time producing and writing, with a new EP out, an album planned to record this summer, and three production projects on the go. They simply can’t give the store they love the time it needs.

We want to thank all of our loyal customers and gig-goers and our current staff and those who have worked here over the years – it’s been a fantastic journey with you, and it’s not the end, we’re just embarking on a new phase.

Stick with Union; we will be there in spirit and we know you’re going to love what Del and Danny bring to the place.