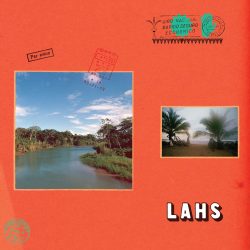 In introducing ‘LAHS’, their fourth LP, the Allah Las are very keen to emphasise their move away from the sound of their Los Angeles roots. The travel metaphors sprinkled liberally across the record (‘Holding Pattern’, ‘In the Air’ ‘On Our Way’), the singing in Portuguese (‘Prazer em te Conhecer’) and the postcard related artwork are all presented as gauges of this shift.

That they are keen to fix the sound with reference to their geography is telling in itself. Having already fashioned three albums from the very spirit and substance of L.A., interpreting its allure for the rest of us it is, in truth, very hard to recognise ‘LAHS’ as anything other than L.A. born and bred. There may be washes of tropicalia from some back street Sao Paulo dive and even snatches of the Bakersfield sound – as heard from the alley behind Trouts Night Club, Dance Hall and Saloon. However, the solid core of the sound remains L.A.; specifically the ’60s L.A. of The Byrds, Love and Buffalo Springfield.

So whilst their sound may have remained remarkably consistent over the course of 4 LPs it is possible to acknowledge a continuing refinement or sophistication. On ‘LAHS‘ we still get a band that appear untainted by cynicism and mischievous at heart. The pysch-folk-jangle-pop musical melange of the era is no guilty pleasure to them, it is something to be celebrated. This latest record is moderated by an infectious, if slightly intoxicated, dreaminess that is lifted by an easy-going candour that captures the perfect light and heat of the textbook luminous L.A. day.

What is not entirely clear is whether this apparent gentrification is driven by an encroaching ennui with their core L.A. influences; perhaps alluded to on ‘Polar Onion‘ when they sing “I’m tired of searching, a sordid affair, the record repeating, with no one aware”. Or perhaps it might reflect a deepening love for these inspirations and a desire to explore the sonic possibilities of each to the fullest extent; to stretch out the languorous folk-rock of Buffalo Springfield or to resonate Love or the Rain Parade’s gentler psychedelic moments. Whatever the motivations for this refinement, or indeed its ultimate purpose, the effort required appears to have worn the poor darlings out and the record’s lack of vigour and urgency is almost palpable.

A sense of dynamic drive is often seen as being a prerequisite for bands of this ilk and as such an absence of energy may not immediately be perceived as a good thing. What it does bring to ‘LAHS‘, over repeated listens however, is the creation of a ‘mood’ that is ultimately the record’s raison d’etre. Through an apparently effortless synthesis of barely-there melodies, meandering guitar jangle and the celestial harmonies created from the lead voices of all four members we get a mood that is warm and hazy with both reflective and languid shades. The partially ‘glitchy’ production of Woods’ Jarvis Taveniere is perfectly in sync with the band’s aspirations and delivers the organic feel to a T. With little spiky details colouring or upsetting mood, depending On how much you value loung-ey laidback uniformity.

This mood is pervasive to the extent that it becomes impossible not to experience the record as a single complete body rather than engaging with individual songs or flourishes. One consequence of this is that it can be hard to fully stay with the record for the duration. This is not to paint the LP as dull, it just occasionally lacks the shade needed to create a counterpoint to the shimmering L.A. desert light and therefore allows the mind to wander.

To counter this, repetitive almost motorik rhythms are employed to sustain the pervading mood. The incisive air-tight drumming here creates a propulsive, almost swinging groove that is new to the Allah Las cannon and provides nuances that serve to draw our attention back if it does start to wander.

The Allah Las may well have travelled far and wide to assemble the constituent parts of this record but what we end up with is another finely-tuned and appealing representation of the sounds of their home town. It’s still ’60s accented jangling psych-folk pop, but they are bloody good at it.