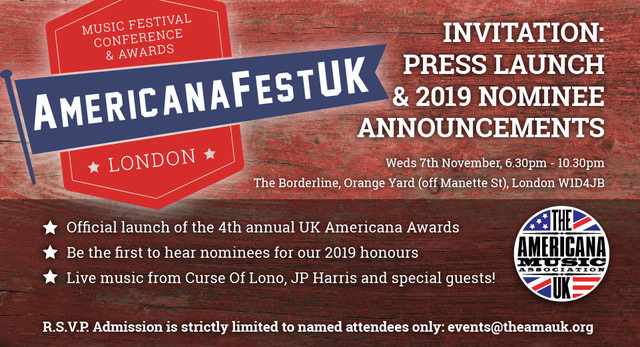 The Americana Music Association UK, the professional trade association which represents and advocates for Americana and roots music in the UK, has announced details of its press launch night which will take place on November 7th. The evening is an opportunity for Americana music fans in two ways:

– to get advance details of annual award nominees and special award recipients for the UK Americana Music Festival and Awards 2019, which takes place between the 29th and 31st of January in Hackney, London – with the awards ceremony itself held at the Hackney Empire on the 31st ;

– to see showcase performances from Curse of Lono and JP Harris and the Tough Choices. JP Harris is guaranteed to bring the honky tonk over from East Nashville playing tracks from his latest album, ‘Sometimes Dogs Bark At Nothing’ – and the evening kicks off what’s only his second ever tour of the UK.

Keynote speakers lined up for the conference next January are Rhiannon Giddens and Ray Benson, bandleader for Western swing band, Asleep at the Wheel.

There are 48 acts set to appear across 4 venues over the 2 nights of 29th and 30th of January. Already announced as officially showcasing at AmericanaFest UK are: Caleb Caudle, Amy Spence, Martha L Healy, The Blue Highways, Lucas and King, Wild Ponies, Birds of Chicago, Jamie Freeman, Police Dog Hogan, Austin Lucas – with news of more acts set to follow.

The press launch and award nomination night on the 7th of November will be held at the Borderline, London, and presented by radio and tv presenter, Baylen Leonard, and singer-songwriter, Sunny Ozell.

Further details are available at: https://theamauk.org